The need to clarify, upfront, that the Syrah grape originates from the Rhone Valley of France comes from the reality that it has miraculously adapted to terroir throughout the world and the younger generation may feel it’s roots lie in South America, South Africa, Australia or California’s Central Coast.  Although available as a single varietal wine in northern Rhone, its rich and fruit-forward plum flavors and spiciness are, arguably, best showcased through its long-standing partnership with Grenache, mourvedre, counoise and cinsault in creating the masterful Rhone Valley blends of Chateaunef-du-Pape, Gigondas and other nearby regions.

The diversity of syrah has led to a swell in its popularity.  The deep color and ensuing flavors find it on the table with spicy South American or Mexican cuisine along with the traditional rack of lamb and other red meats.  An extreme example of the range of this grape is Shiraz, it’s Australian persona that appeals to American 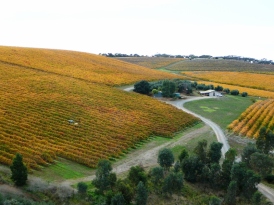 The most simplistic way to evaluate syrah is that warmer climates bring out the more fruity flavors and cooler temperatures drives the spice, peppery nuances.  Now the most produced Australian wine grape, shiraz is grown in warmer climates, such as the Barossa Valley, allowing for full ripeness and enhanced flavors. Most likely, the Penfolds Shiraz South Australia Grange 1990 was the first Australian shiraz to be named Wine Spectator magazine’s “Wine of the Year” in 1995.   Through this Century, three Barossa Valley shiraz consistently turn up among the top ten wines.

vineyards throughout the Valley and very fruit forward.

Boasting four top 100 designations from WS since 2006, the Mollydocker Shiraz McLaren Vale “Carnival of Love” 2010 (94 pt/$90) obviously has the same rich, flavorful qualities of previous vintages that I have tasted.  Of course the expensive price does diminish the appeal of an otherwise near perfect shiraz.

One of my wine goals in 2013 is to taste a flight of California syrah from San Luis Obispo County’s Alban Estate Winery, mentioned in any discussion of the state’s best. A scan of recent Wine Spectator reviews reveals that nearly half of the top rated Syrah were from Alban estate vineyards.  Self-proclaimed as “the first American winery and vineyard established exclusively for Rhone varieties”, Alban has been creating superb syrah and other Rhone wines long before they appeared on my radar.  Their flagship syrah seems to be the Alban Syrah Edna Valley Seymour’s Vineyard ($145) averaging 96+ among vintages in the 21st Century. The downside of Alban wines and a major obstacle to my new goal is that they are expensive and nearly impossible to find. For those seeking to expand their viticultural horizons or an appreciable investment, Alban Winery and Vineyard is a logical choice.

We have determined that the essential characteristics of syrah are the flavors of ripened plums or other dark fruit and spice, in the range of cinnamon to white pepper with climate dictating the extent of each.  My issue with some of the cooler climate syrah comes from an imbalance of flavors, leading to an overbearing spice and, at times, an overly tannic finish.  I find myself anticipating harshness and becoming overly delighted when it emerges softly and balanced.

To this end, I have discovered a trio of syrah wines from Bonny Doon Vineyard and Winery, each from different regions of the central coast, all with a great nose and intense fruit flavors enhanced on the finish.  Randall Grahm, one of the original Rhone Rangers, first produced the Bonny Doon Syrah Bien Nacido

Vineyard ($42) from the esteemed Santa Maria Valley vineyard known for turning out smokey elements in the wine. Well in-balance, this 100% syrah is my choice to pair with rack of lamb. 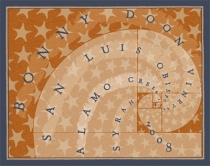 The spices in the 2008 Bonny Doon Syrah Alamo Creek Vineyard ($35) impart a smokiness that boosts the flavors to a new level.  Described as an Old World style syrah, the depth of flavors makes it a favorite with hearty stews and gamey meats.  The third and most current release, the 2009 Bonny Doon Syrah Chequera Vineyard ($42), originates from a warmer Paso Robles Vineyard and adds 17.2% viognier that drives the concentrated fruit flavors of blueberry and plum. Of the three, this is my choice to enjoy independent of any food on the table.  A comparative tasting of the three wines can reveal distinctive characteristics that can only be

wholly enjoyed after 1-2 hours of decanting or, at a minimum, the “screw-cap” removed.

Paso Robles is adding syrah to its repertoire of high quality zinfandel and Rhone blends.  Two typically available high value/quality wines include the 2010 Eberle Winery Syrah Steinbeck Vineyard ($24), awarded 93 pts from Wine Spectator and the 2004 Le Vigne di Domenico Syrah ($42), a luscious wine that is, unquestionably, representative of full fruit flavors. However, due to the exposure given the Steinbeck syrah, the 2010 vintage is sold out at the winery and the 2004 vintage Le Vigne syrah won’t be around forever.

Another memorable 2012 syrah tasting was the 2009 Penner-Ash Oregon Syrah ($32), sourced from vineyards as far south as the Rogue Valley and east as the Columbia Gorge.  Exceptionally balanced, the vanilla on the nose and palate, the rich, velvety texture and deep expressions of fruit resulted in a purchase that is

resting in my cellar.

The syrah and petite sirah grapes are often discussed simultaneously, but for no justifiable reason.  They are not related in any way other than similar sounding names. That being said, they did recently team up in the Shafer Vineyards “Relentless” Napa Valley 2008 (96 pt/$60), Wine Spectator magazines “2012 Wine of the Year”.

With a deep, inky color, a revealing bouquet and heavy texture and flavors that are accessible to most palates, petite sirah’s stock is rising. Searches for good California petite sirah can start in the northern Calaveras and Amador Counties, and extend through north Napa Valley. There are many fine wines to choose from, none with a higher price-to-quality reputation that the 2010 McManis Family Petite Sirah ($10-12).  I recently found it on a list at “Bistro Nook” in Santa Monica and enjoyed the dark fruit, smokey bouquet and oak-infused, flavors of currant and raspberry, intense, yet oddly restrained. Don’t shy

away from any vintage.

Exploring the global appeal of syrah/shiraz/sirah will be my fun research project in 2013.  What syrah region in the world is producing that wine that best suits my palate?  I’ll keep you updated.