The Wines of Saratoga

counties. It has many diverse micro-climates that are all, in some way, influenced by the Pacific Ocean, the mountains and San Francisco Bay.  The region is often overlooked, but produces well-rated wines, vintage to vintage.

The Santa Cruz Mountain appellation is forever steeped in wine lore. The Ridge Montebello Vineyard Cabernet Sauvignon 1971, from the hills above Cupertino and the Apple campus, was rated fifth among ten cabernet sauvignon wines, five French and five California, competing in the original 1976 Paris Tasting that put us on the world stage.

In a 2006 reprise blind tasting of the original aged red vintages, the 1971 Montebello Vineyard was ranked at the top.  Current releases are priced near $150 per bottle and still sought after by wine collector’s.

The original destiny of the Santa Cruz Mountains appellation was supposed to be pinot noir.  The coastal influences and cool evenings were thought to offer the perfect terroir.  Although there is still plenty of pinot noir grown here, the grape struggles to reach full expression in many of the micro-climates.  Winemakers like Merry Edwards, left for the Russian River Valley, where she produces excellent pinot noir and sauvignon blanc.  Others, like Randall Grahm from Bonny Doon Cellars, stayed and changed his business model to Rhone blends, becoming an original Rhone Ranger. In a region that has been described as too hot for pinot noir and too cool for cabernet sauvignon, the Santa Cruz Mountains appellation wineries are comfortable in their own skins and celebrate their size and diverse micro-climates with many varietals.

On the far west end of the Silicon Valley, at the base of the Santa Cruz Mountains, is the quaint, upscale village of Saratoga, in the middle of the appellation.  It is the last stop 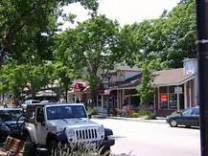 the village of Saratoga

before entering the remote backwoods that take you through the giant redwoods of Big Basin State Park and, eventually, to the beach at Santa Cruz.  More vineyards are appearing in the hills outside of town and exploring their wines and other local attractions makes for a fun weekend mini-vacation.

The flagship Saratoga winery, Mount Eden Vineyards, is also one of the oldest and finest producers in the United States, growing pinot noir, chardonnay and cabernet sauvignon for over seventy years, under the leadership of proprietor Martin Ray for the first thirty years. For me, there is no better white wine, vintage to vintage, in California than the Mount Eden RESERVE Chardonnay, Santa Cruz Mountains ($75). It is consistently named

to Wine Spectator magazine’s annual Top 100 list.  Ratings are generally in the mid-nineties and the 2012 vintage was named to the No. 5 slot among 2015 releases.

The RESERVE consists of the same chardonnay grapes used for the Mount Eden Estate Bottled Chardonnay, Santa Cruz Mountains ($64) release, planted in half of the wineries forty acres. The difference is a viticulture practice that ages the wine in French barrels for ten months, then transfers it, with “gross lees,” to stainless steel tanks for several months of additional aging.

The lees consist of dead yeast that remain, like some soap cake, on the sides and bottom of the barrel.  Under a process known as racking, the wine is temporarily transferred to another barrel and dead yeast is removed.  Another process, sur lee, mixes the build up

Vineyards in the Santa Cruz Mountains

into the wine, creating a rich, silky texture.  The result is a Burgundian Grand Cru- style chardonnay with an earthiness and mineral nuances to enhance the rich fruit and finish.  There are many great chardonnay releases out there, but my palate puts Mount Eden RESERVE and the Foley Estate “Barrel-Select Chardonnay ($55) at the top of the list.

Different from most white wines, the Mount Eden chardonnay releases can continue to mature in the bottle for several years, a tribute to the vine stock, terroir and wine-making practices that have evolved over decades.

One that does not display heavy fruit influences, the Mount Eden Estate-bottled Pinot Noir, Santa Cruz Mountains ($62) is a medium-bodied Burgundian-style wine, austere, balanced and elegant.

There is no doubt that these hillside vineyards are cooler, with more coastal influences than cabernet sauvignon is used to, preferring warmer days.  Expect more acidity, but not soon.  the winery declares that “fine integrated tannins buttress characteristic flavors of red currant, blackberry and earth, adding, “Recommend cellaring is ten to fifteen years.”  After all, it is Chateau Margaux stock.

There is a non-tasting, historical tour of the wine cellar, available by reservation only and a mailing list that allows for early notifications of new releases.  Mount Eden is an iconic California winery, yesterday, today and tomorrow.

Saratoga’s Savannah-Chanelle Vineyards, three miles from town, was founded in 1996 by Mike and Kellie Ballard, but the land was serving as a functioning winery well before Prohibition.  They produce pinot noir but, for me, the attraction is three unique releases.

Admittedly, my knowledge of port is limited.  I am always interested in the reviews of those from Portugal and a few California releases that get away with using the word, 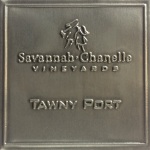 “port” on the label. The 2004 Savannah-Chanelle Syrah, Tawny Port ($99) is from the same wine as the earlier released 2004 Ruby Port, but aged another nine years. A characteristic of aged port is the enhanced aromas that must be enjoyed for the complete experience.  A special wine for port aficionados.

California winemakers are obsessed with single-varietal releases and I have tasted many pure cabernet franc wines, some from the Santa Cruz Mountains.

Savannah-Chanelle claims to have the oldest cabernet franc vines in the state, dating back to 1923.  An end result from these old vines, The 2013 Savannah-Chanelle Cabernet Franc Estate ($65), has crisp cranberry flavors with definite herbal influences, almost like menthol.

Lastly, and probably their most unusual wine is the 2013 Savannah-Chanelle “Montmartre” ($60), an eclectic blend of cabernet franc (45%) zinfandel (32%), carignane (9%), and syrah (14%) that displays an array of berry flavors, courtesy of the two dominant grapes. Some extra aging has resulted in a nice, rich mouthfeel.

A WWII pilot in Europe and, later, chief research test pilot at NASA, George Cooper founded Cooper-Garrod Estate Vineyards in 1973 and spent the rest of his life making wine.  Cooper died in 2016 at the age of ninety-nine, but his legacy continues at

the winery today.  They offer a full palate of wines including the highly rated 2010

Of Spanish origin, “Ser” means “expressing identity.”  Ser is also an “artisanal” winery, the identity of Nicole Walsh.  She has an array of experience, including local Bonny Doon Cellars  and as far away as Marlborough, New Zealand.  She now specializes in creative old world-style wines from vineyards in the Santa Cruz Mountains.

Distinctive wines from Ser that caught my attention were the dry, creamy 2015 Ser 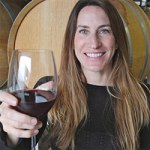 Sparkling Rose’ of Nebbiolo ($34), an Italian varietal, the 2016 Ser Rose’ of Cabernet Franc ($22) and the rare 2014 Ser Cabernet Pfeffer ($45) from the Enz vineyard in San Benito County.  Ser shares an accessible tasting room with

Silvertip Vineyards on Big Basin Way, the main street of Saratoga.  Checking out Cinnabar and Mountain Winery are other options along the Saratoga wine trail.

For the most charm, the towns of Los Gatos and Saratoga are good, convenient bases and lodging and restaurants are available at all levels. Strolling both towns is part of the experience.

Between tastings, visitors should not miss the breathtaking Villa Montalvo Estate and

Hakone Gardens outside of Saratoga

Arboretum (where we married 47 years ago) and the eighteen-acre Hakone Gardens, one of the oldest and most impressive Japanese gardens outside of Japan. Also, many of the wineries have concert venues and their music series schedule is posted online.

Exploring the entire Santa Cruz appellation will take some time, although it could be fun.  The wines of Saratoga can be a great introduction to the elegantly charming side of the Silicon Valley.