The Wines of Corbières

During each of our two nights in Castelnaudary in southern France, we dined with friends at Chez David, a restaurant owned by Chef David Campigotto, a son of chefs, who prepares his renown cassoulet throughout the world.  Both evenings, based on the recommendation of our waiter, we selected a local 2013 Celliers d’ Orfee Corbières Cuvee

Sextant and were intrigued. Aside from the cassoulet, it also paired well with fresh cod on the second night. This newly discovered wine had a great nose, rich, fruity flavors and, most appealing, it was inexpensive.  While it sold for 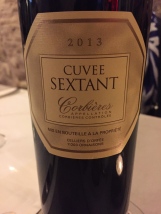 twenty euros in the restaurant, we consistently found other wines from Corbières priced at ten euros. What else could we learn about these wines?

Corbières is the largest appellation in the Lanquedoc-Rousillon region, producing nearly fifty percent of its wine production on over thirty thousand acres.  Nearly all the wines are red blends, leaving about five percent for white and rose’ production.  They are similar to Rhone blends with one exception.  Among the five major grapes used in Corbières blends, carignan, also known as carignane or mazuelo, is often the main varietal.

Blended with grenache, mourvedre, the grenache-related liedener pelut, syrah and, at times, the more obscure piquepoul blanc and tenet noir, carignan clearly dominates.  During the late 1980s, carignan was the most widely produced grape in all of France, with over 400,000

acres under vine.  Then, in a comprehensive approach to improve the overall quality of  wines, the European Union hatched a “vine pull” program, offering subsidies to growers for pulling up their vines. As a result, production of Carignan dropped over forty percent and was replaced by merlot as the most abundant varietal.

Outside of the appellation, single-varietal carignane is produced by several California winemakers including the 2013 Carol Shelton Carignane “Oat Valley” ($28), from 60-year old vines in north Sonoma County’s Alexander Valley.  I recently paired this Santa Rosa-based wine with fresh salmon and found the creamy texture and smokey flavors complimentary, not overpowering.

We left Castelnaudary by boat, cruising down the Canal du Midi. In the villages and towns along the route, including Bram, Carcassonne and Trebes, the shops and restaurants proudly showcased their local wines, including the Cuvee Sextant.  Enjoying locals wines enhanced the cultural experience of the canal, especially at these low prices. 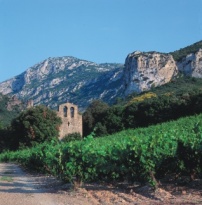 The Corbières appellation is so large and diverse that it has eleven identified terrors within its boundaries. Wikipedia defines terroir as a “set of all environmental factors that affect a crop‘s phenotype, unique environment contexts and farming practices, when the crop is grown in a specific habitat.”  This is a complicated way of saying that when factors like climate, sun exposure, soil types and conditions are matched with the proper varietal, stock and farming practices, a harmonious relationship ensues that creates a unique characteristic to the wine. The term “terroir” is not exclusive to wine.  It is used in growing coffee, chocolate, chili peppers, agave and others.

Still intrigued with this new-found region and what is has to offer, I began, upon my return, to research what was available in California.  Surprisingly, Corbières wines are readily accessible in wine shops and on-line.  It helps to know what you are asking for.  I have not tasted any of the Corbières wines described below.  However, based upon a recommendation or something in the wineries background that caught my attention, these are releases from the region that I have targeted.

From a small, organic winery described as a “true one-woman show,” the carignan-dominant 2014 Clos de l’Anhel 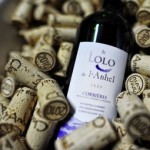 “Lolo de l’Anhel” Corbières($13) is a blend from limestone-laden soils, enhanced with small amounts of syrah, grenache and mourvedre. The low price reflects its profile as a great everyday wine. The Clos de l’Anhel winery also offers, at a higher price, the 2014 Clos de l’Anhel “Les Dimanches” Corbières ($23), that blends carignan (60%), from 80-year old vines, syrah (30%) and grenache (10%), boasting rich fruit and minerality, both welcome to my palate.  Les Dimanches translates to “Sundays.”  This is meant to be a special wine, reserved for special occasions.

From twenty-three different organic and biodynamically grown grape varietals that are field blended and harvested together, then co-fermented, the 2015 Domaine Tour Boisée “Plantation 1905” ($12) is as unique a wine that can be found within the region, from vineyards in the village of Minervois, near Carcassonne.  One of the newer producers in the region, dating back to 1826, the array of varietals in the Plantation vineyard were first planted in 1905.  I did not recognized the names of fourteen varietals used in this all-embracing blend, but, at $12 per bottle, I am very curious. 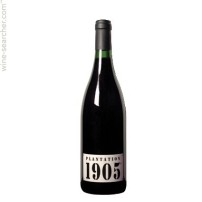 My interest in the Michel Gassier Corbières de Nimes Nostre Pais Red 2013 ($22) rose because the vineyards are in the AOC Corbières- Nimes appellation, located between the cities of Montpellier, Nimes and Arles, all places that we recently visited.  Secondly, it is grenache dominant.  Because the Corbières appellation is so large, these vineyards are within an hour of the Rhone Valley and share deep beds of limestone that influences the flavor.

Aside from grenache (40%), this blend includes equal parts carignan, syrah and mourvedre.  Awarding it 90-92 points, Wine Advocate described a wine that “exhibits pretty, perfumed notes of raspberry and passion fruit intermixed with subtle leather, violets and spice.”  With the history, unique terroir and reviews, this is the one that I will pursue first.

On the surface, the Chateau d’Aussieres Corbières 2013 ($30) is a typical Rhone blend.  Syrah-dominant and supported by grenache and mourvedre, this blend mirrors those produced in Chateaunef-du-Pape, Gigondas and other appellations in the southern Rhone Valley.  A wine that consists mostly of syrah, the tasting notes described fair amounts of typical spice (pepper), herbs and toasted flavors.  Of this vintage, Wine Advocate states, “Domaine d’Aussières has turned out an incredibly classy, elegant 2013 Corbières that checks in with the top wines of the appellation.”

For those who follow French rugby, apparently, Gerard Bertrand is a household name.  After 17 years as a star in the French leagues, he returned to the family wine business in Corbières and, recently, saw his Gerard Bertrand

Since his retirement from professional rugby, Bertrand has focused on acquiring regional vineyards and refining his organic and biodynamic practices. Wine Spectator describes the 2012 vintage as “Full-bodied and powerful, with decadent layers of raspberry compote, kirsch and red plum notes that are met with savory details of herb and cured meat.”  The release price of the wine was under $20, but I found that wholesalers are seeking higher sums since its recent recognition.

The Lanquedoc-Rousillon wine region extends from the Pyrenees Mountains to the Mediterranean Sea.  The Corbières appellation, bordered by Carcassonne, Narbonne and Perpignan is large and assorted enough to offer a range of styles and terroir. These wine are made to pair with duck, pork and other meats in the region’s rich cassoulet, but are also complimentary to chicken and seafood.

There is a “new age” renaissance emerging from Corbières wines.  The number of wineries has expanded in recent years and there is a strong desire to improve the quality of the wine and vineyards in a responsible, sustainable way.  We discovered and explored this region via the Canal du Midi, but their local industry is expanding to welcome tourists of all types.  Of course, you no longer have to travel to Corbières to enjoy these finely blended wines. I expect that awareness among US wine consumers will swell as they expand their presence in our market.