Peter Nelson, co-owner of Monopole Wine in Pasadena invested significant time researching the nuances of the music and thoughtfully used his skills as a master sommelier to pair it with fine European wines.  For example Bach’s Allemande E flat Major (Suite IV) is described as “a dance, both serious and amusing”.  In a 1739 review, Johann Mattheson called it “a serious and well-composed harmoniousness in arpeggiated style, expressing satisfaction and amusement, and delighting in order and calm”.

Defining it “an exceptional wine, serious, yet playful”, Peter selected the 2009 Von Buhl Sekt Brut Riesling, a German sparkler from Pfalz that immediately draws attention to its acidity and bubbles so as to lead you through balanced, citrus flavors, the calm in the music.  And so the evening began.

If one devotes an evening to attend a wine and Bach pairing recital, it’s best to be as trusting as possible. A totally open mind, an amenable palate and good listening skills can facilitate immersion into the moment and help to feel the beauty of the music with the texture of the taste.

None of this can occur unless the quality of the music can stand up to the wine.  Fortunately, we were privileged to have cellist Jevgenji Raskatov and violinist Amaruka Hazari to aptly manage the melody while enjoying each wine with us. I overheard someone say that Jevgenji was a biochemist in his day job, which I assumed was music.  Great minds and talent seem to abound in the Pasadena area surrounding Cal Tech.

Referencing Peter’s extensive research and knowledge, let me share my perceptions of the wines that were selected to enhance the unaccompanied cello and violin suites of Johann Sebastian Bach. 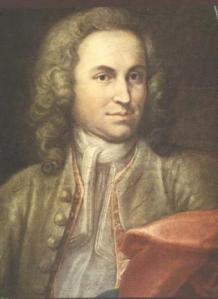 As previously described, this wine is a highly acidic sekt, the traditional sparkling wine of Germany, Bach’s homeland.  The refreshing crispness does not

overwhelm as pleasant flavors of citrus fruit pass through the finish. This sparkler would also pair well with cheeses like Mahon (cow’s milk) or Humboldt Fog (goat’s milk), as both can be “serious, yet playful”.

This piece seems to have been inspired by the joy of a walk on a crisp autumn day, an ambience of soft rain falling that our cellist superbly captured.  Quite possibly because it’s October and I took a late afternoon walk, I could feel the described “autumn earthiness” of the 2009 Markowitsch Blaufrankisch Spitzerber from Austria.

Apparently blaufrankisch is the country’s most dignified grape known for concentrated fruit flavors and an earthiness or “Teutonic” character. The wonderful aromas alone, balanced while casting a candied fruit bouquet, would have been a sufficient pair with this music.  Priced below $20, I was also inspired to bring a bottle home.

The piece is a slow, purposeful dance that, although exquisite and full, is sad.  In Peter’s mind, it needs a nice red Bordeaux, “dark, earthy and just a little brooding, but very satisfying”.  While it has some age, the 2005 Chateau Canon, Fronsac is not over-powering, but has some depth and smokiness to its flavors.  There is a strong recommendation that this wine be consumed with this music by candlelight or an appropriate mood lighting app.

The description of a Riesling Spatlese Trocken tells us that the grapes were harvested at their ripest form, just short of late harvest or “noble rot”, botryris.  However, they are not sweet, maintaining full pure fruit flavors and a perfect minerality.  It was noted that Schonborn has been producing wine since the 13th century and that Bach could easily have been enjoying a glass while composing this piece.  Peter’s aim was to pair “purity with purity” and the results were ideal.  When people speak of great German Riesling, this wine is what they are referring to. 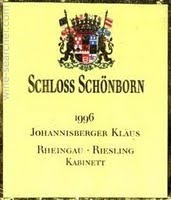 As we spoke earlier of the Spatlese Trocken, harvested at their fully ripened form, the Bert Simon-Muller-Thurgau Beerenaulese takes them beyond ripe, with a “botrytis” affected very late harvest. The result was aptly designated “nectar of the gods” and “made from the tears of angels”.  Rich, opulent, full-bodied, full-flavored, Peter sees the internalization of this wine and music leading to purification of the soul.  I see this wine having the same effect with Mozart, Sinatra or even Coldplay. As Peter defined the sonata as “utterly cathartic”, I was convinced that he found the proper therapeutic wine.

These pieces, both of French origin, are defined as lively dances with some seriousness. Selecting a traditional French wine for a French dance, the Bouchard Auxey-Durresses is a nice red Burgundy from the pinot noir grape. 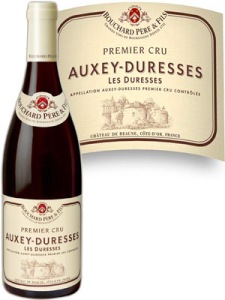 The Burgundy region produces elegant wines with bold red cherry flavors and a soft minerality.  According to Peter, “the wine is clearly mimicking the dual character of the minuet”. To me, both were uplifting.

The final piece, one of Bach’s most famous, features a series of motifs that “start with a quicker tempo and continues with great energy and melody and builds to an urgent climax before finishing in perfect balance”.

To this end, Peter has chosen a bold Italian blend from the Veneto region, not only because it completes a normal progression of our tasting, but because it combines merlot and corvina, grapes from French and Italian origins, expressing the influence of Italian soil. The results were highly intense fruit with a rich,

Aside from being Jevenij’s favorite wine, Zenato Cormi is also known to pair well with our final surprise:  fresh creative chocolates from Pasadena-based “Mama’s Gone Cacao”.

Raskatov and Amaruka continued to play a few encore pieces that, along with the chocolate and wine, was a superb finale to a captivating evening.  The concept of pairing good wine and classical music is intriguing and, under the tutelage of a master sommelier, one can begin to feel the connections.  At a minimum, it is an opportunity to enjoy good music, fine wine and pleasant company.

Monopole Wine, located in Pasadena’s theater district, presents special tastings and classes on a regular basis that are describeded on their website.

Lyle is a freelance writer who specializes in “lifestyle” issues like wine, food, travel, music, film and memoir. He currently writes “On The Vine,” a weekly wine column for the San Francisco Examiner. END_OF_DOCUMENT_TOKEN_TO_BE_REPLACED
This entry was posted on Tuesday, December 4th, 2012 at 6:13 am and posted in music, Wine. You can follow any responses to this entry through the RSS 2.0 feed.
« The Wines of Newburg
In Pairing Wine and Cheese, “Honor the Wine” »

One response to “Wine and J.S. Bach”