Two-hundred forty-thousand contiguous vines, dry-farmed, hand pruned and picked, in the middle of France’s famed Chateauneuf-du-Pape appellation is what defines the family owned Chateau de Beaucastel, the region’s largest.  Eighty-percent of the

270,000 bottles produced annually are exported to the United States and Canada and

they contain iconic French Rhone wines for discerning palates.  Traveling through the region in October, we had the opportunity to visit Chateau de Beaucastel to tour their vineyards and production facility before tasting current and past releases.

The estate includes a quarter of a million vines that, aside from being cultivated by hand, are all organically grown and de-stemmed before fermentation.  The Chateau produce and use all thirteen grapes permitted by the governing AOC, seven white and six red.  The white grapes, namely roussanne, picpoul, muscardin, picardan, clairette and bourboulenc, are fermented in separate rooms from the red grapes, mostly in large concrete tanks with 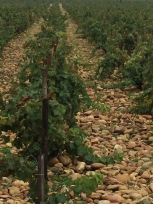 Diluvial deposits (stones) in the vineyards

tile floors.  Among the red grapes, syrah and mourvedre are aged in oak, grenache, vaccarese, terret noir, cinsault and couniose in similar concrete tanks. All varietals are fermented separately and blended only after the malolactic fermentation process is completed for each, giving the wine a softer, more balanced mouthfeel.

While visiting the estate, we soon understood that we were visiting French Rhone royalty, one that has been a force among the world’s magnificent Rhone blends for the past

107 years.  The bottles in the cellars are enigmatic, the huge, meticulous barrel rooms look like they belong in Architectural Digest and each of the tall concrete vats had beautiful tile flooring. After seeing the immaculate grounds, we were assured there were no shortcuts at Chateau de Beaucastel.

In 1687, the land where the Chateau exists today was given to Pierre Beaucastel by Louis XIV after he converted to Catholicism. In 1909, Pierre Tramier transferred ownership of the property to his son-in-law, Pierre Perrin who established the Chateau de Beaucastel.  Pierre’s son Jacque 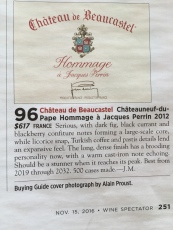 Perrin took over operations shortly after and spearheaded its growth and reputation until 1978 when it was transferred to his children who collaboratively operate the estate today. The recently released Chateau de Beaucastel Chateauneuf-du-Pape Hommage a Jacques Perrin 2012 ($617), is a very serious wine produced only during great vintages, that pays respect to the long-time winemaker and innovator.  The experts have rated this wine in the high nineties and I will just have to take their word for it.

We began the tasting with the Chateau’s only white release, using all permitted varietals.  The Chateau de Beaucastel Chateaunuef-du-Pape Blanc 2015 ($70) will be released in January 2017, ready for consumption and peaking within the first two years. They had experienced more heat and less rain in 2015 that allowed the roussanne, 80% of the blend, to fully ripen.  Small amounts of grenache blanc, picardan, clairette and bourboulenc help add a beautiful golden color with the stone fruits and spice on the nose and nice mineral notes on the finish.  The estate describes the terroir as “molasses seabed of the Miocene period covered by diluvial deposits (rolled pebbles)”.  The diluvial deposits are actually medium reddish stones, two-inches in diameter, that covered the soils throughout the vineyard. Representing the limited plantings of the white varietals, the nicely structured, balanced “Blanc” is not excitable, but subtle and elegant.

Out to the west, the vineyards are dissected by a small, but significant road. Any vines located outside the road are not within the Chateauneuf-du-Pape boundaries and cannot, according to AOC regulations, be identified with the name.  Therefore, the

The white varietals across the road produce the Coudoulet de Beaucastel Cote du Rhone Blanc 2014 with a zesty, citrus quality, revealing apples flavors mid-palate. A blend of marsanne, viognier, clairette and bourboulenc, aged half in oak, half in steel, this is one for the patio on a summer evening. Bourboulenc is a white grape grown in southern France, primarily the Rhone, Provence and Lanquedoc. Its challenge is that it is a late-ripening grape that must be fully ripened to achieve full body, citrus aromas and smoky flavors it is known for.

The flagship release of the estate is the Chateau de Beaucastel Chateauneuf-du-Pape Rouge, considered an adolescent until it is aged 20 years or more. Today we tasted a flight of the 2013, 2007 and 2001 vintages, each with very distinctive structure and flavors.

The young Chateau de Beaucastel Chateauneuf-du-Pape Rouge 2013 ($60), mostly grenache and mourvedre has concentrated berry flavors with some nice spice throughout. Our host said that it would take another 4-5 years before the wine is taken seriously, but the balance and structure was already evident. The vintage 2007 was a great one for the Chateauneuf-du-Pape appellation and the Chateau de Beaucastel Chateauneuf-du-Pape Rouge 2007 ($90-100), awarded 96-pt by Wine Spectator, expressed a deep ruby color and delivered loads of spice, licorice and burnt wood flavors on the palate, more earthy than the recent release. We missed the 2005 vintage that was #8 on Wine Spectator’s Top 100 wines of 2008 with a 98-pt rating.

Although still described as a young wine, the Chateau de Beaucastel Chateauneuf-du-Pape Rouge 2001 ($60-75) was balanced with a very earthy quality that set it apart from the other two. With an aromatic nose, the wine was complex and spicy with flavors of licorice, roasted herbs and, what was described as “cigar box”. Aside from the main three varietals, the 2001 vintage adds counoise, cinsault and a small percentage of other red and white grapes.  This wine began to express what an aged Chateau de Beaucastel wine could taste like and it was for serious consumers.

The presence of the Chateau de Beaucastel in the United States goes far beyond importing their wines. The well-respected Tablas Creek Winery in Paso Robles, 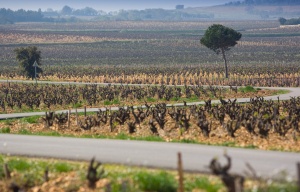 producer of terrific Rhone-style wines is a 30-year partnership between the Perrin and Haas families.  Attracted to the limestone laden soils and similar climate to Chateauneuf-du-Pape, the partnership purchased land in 1989 and imported clones from the French estate.  Today, Tablas Creek, similar to the patriarch, produces Rhone blends from their “Espirit de Beaucastel” and “Cotes de Tablas” labels. Tablas Creek Winery is organic and sustainable and their wines are well-rated, best represented by the 2006 Tablas Creek Espirit de Beaucastel Paso Robles (93-pt/$45) that was named #50 on Wine Spectator’s Top 100 Wines of 2008.  The Mourvedre, grenache, syrah and counoise blend is full-bodied with earthy flavors of ripened berries and nutmeg.  The best example of Rhone-style wines outside of Chateauneuf-du-Pape is Paso Robles, centrally located for access by all Californians.

Another partnership with the Miraval estate in Provence, owned by Angelina Jolie and Brad Pitt, produces the Jolie-Pitt and Perrin Cotes de Provence Rose’ Miraval

2012 ($25)that landed the 84th spot on the Wine Spectator Top 100 Wines of 2013 list, leading their marketing staff to hail it as the world’s best. There is a bit of uncertainty about future vintages but we were told that Brad is mostly involved.

Visiting the Chateauneuf-du-Pape appellation in southern

The vines are manicured by hand

France is a special treat for anyone serious about wine.  But, the opportunity to spend time at a historical and refined producer like Chateau de Beaucastel, to observe their methods and facilities, is truly a memorable learning experience.

Lyle is a freelance writer who specializes in “lifestyle” issues like wine, food, travel, music, film and memoir. He currently writes “On The Vine,” a weekly wine column for the San Francisco Examiner. END_OF_DOCUMENT_TOKEN_TO_BE_REPLACED
This entry was posted on Tuesday, November 8th, 2016 at 12:00 am and posted in Travel, Wine. You can follow any responses to this entry through the RSS 2.0 feed.
« “Zen for Zin”: The Wines of Carol Shelton
A Tasting in Chateauneuf-du-Pape »