Many years ago, I purchased a 1982 vintage of Pine Ridge Stag’s Leap Cabernet Sauvignon, cellared it and drank it in 1990 at an anniversary party.  It was a time when my palate was developing and I began to be more circumspect in my wines choices.  Since

then, the number of wineries and choices in the Napa Valley have grown exponentially while Pine Ridge Vineyards has continued

tosustain and evolve and is now celebrating its 40th Birthday at their Stag’s Leap District location.

The keys to their success are the same as other producers of fine wines:  good stock in the right terroir, meticulous farming practices, thoughtful enology and the best oak available.  The strategic way that Pine Ridge has grown their winery to ensure sustained quality is a story.

Pine Ridge owns and farms vineyards in five prestigious Napa Valley appellations to produce cabernet sauvignon and cool-climate chardonnay: four in Stag’s Leap, three in Carneros and one each in Rutherford, Oakville and Howell Mountain.  As the weather and the vintages vary, they will always be assured some of the best fruit in the valley.

Pine Ridge also has a veteran winemaking team that has worked together for nearly a decade.  At their recent birthday celebration, 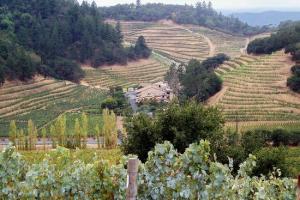 General Manager and Winemaker Michael Beaulac introduced Vineyard Manager Gustavo Avina as someone who understands the local soils and vines as well as anyone in the valley.  Avina has been with Pine Ridge since 2003 and his team has met the challenges in working with many different microclimates and diverse soil-types including, but not limited to clay, sandy loam, volcanic, and silty clay loam.

Beaulac joined the Pine Ridge group in 2009 after years of developing his craft while working at nearby notables Murphy-Goode,

Markham Vineyards and St.Supery Winery.  He enthusiastically described the current and future vintages as we entered the elaborate network of caves.  Before we barrel-tasted three future cabernet sauvignon releases, Michael spoke of his excitement about soon adding a sauvignon blanc to their palate of wines. In recent years, many established Napa Valley producers have become serious about sauvignon blanc and Beaulac believes that Pine Ridge will be among them.

My first taste of Pine Ridge cabernet sauvignon in years came from a barrel as Michael removed the “bung” and used a “thief” to transfer the juice to my glass. The 2016 and 2017 futures need and will get more time but I was impressed with the expressive flavors and balance that was already at hand.

Before leaving the depths of the underground grotto, we visited Club 47,a very private lounge with comfortable furnishings, soft lighting and a large Chihuly glass art installation. The cave room is used for special options such as Savor Pine Ridge, a VIP tastings of the five cabernet sauvignon wines paired with “small bites” dishes from the in-house chef.

As anticipated, all the cabernet sauvignon releases are stunning wines.  The Stag’s Leap District Cabernet Sauvignon 2014 ($140) 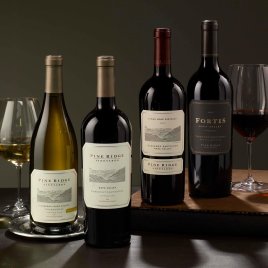 follows past releases from the steep, hillside vineyards that surround the winery, dating back to 1978.  There is such history here that the stag supposedly took his final leap from the cliffs atop these vineyards.

Beaulac describes a love for the Howell Mountain appellation, that at 2,000 feet elevation, is different from others in the valley because of cooler temperatures and rocky, volcanic soils that produce small-cluster fruit with intense flavors. The Howell Mountain Cabernet Sauvignon ($150) has been sourced from the estate Los Posadas Vineyard since 1986 and typically earns ratings in the mid-nineties.

The cooler Carneros appellation, exposed to foggy days, has long been the ideal terroir for chardonnay like the inaugural single-vineyard Carneros Collines Vineyard Chardonnay 2015 ($48) whose rich mouthfeel is derived from sur lee aging and full malolactic fermentation.

Michael Beaulac and Gustavo Amina in the vineyards

Equally impressive releases included the 2013 Petit Verdot ($75), from the original Stag’s Leap vineyards and the bone-dry 2016 Chenin Blanc ($38), sourced from Clarksburg in the Sacramento Delta region.

As impressive as the site and facilities are, Beaulac spoke of an expansion project designed to enhance the tasting experience for current and future members. Clearly, Pine Ridge does not plan to sit on its laurels for the next forty years.

Lyle is a freelance writer who specializes in “lifestyle” issues like wine, food, travel, music, film and memoir. He currently writes “On The Vine,” a weekly wine column for the San Francisco Examiner. END_OF_DOCUMENT_TOKEN_TO_BE_REPLACED
This entry was posted on Monday, July 23rd, 2018 at 2:51 pm and posted in Wine. You can follow any responses to this entry through the RSS 2.0 feed.
« My Whites of Summer
Dutton-Goldfield Celebrates Twenty Years »