The Smith Brothers are still making wine on Spring Mountain

On the westside of the Napa Valley, high above St. Helena is  where the vineyards of the remote Spring Mountain appellation are located.  The Smith Brothers, Stuart and Charles, have been pioneers in the hillside appellation since the early seventies when they cleared the land and re-established vineyards that had been abandoned since the turn of the century.

Records show that ownership of the Smith-Madrone property was first granted to George Cook in 1885. During the 1890s, the 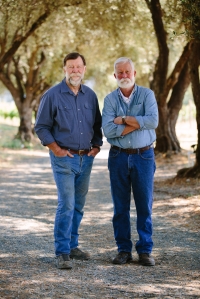 aphid phylloxera infected and destroyed the vineyards on Spring Mountain and, in 1905, they were abandoned and remained fallow for sixty-five years.

Strangely, Stuart Smith discovered his passion for wine while completing undergraduate studies at UC Berkeley in the 1960s.  He soon completed a Master’s Degree at UC Davis and began the search for a place to pursue his craft.

Stuart has been called a leading voice for hillside vineyards, an accolade he downplays.  He claims that he was always looking for a higher altitude hillside site because he felt it produced the best grapes.  When the opportunity arose for Stuart and Charles to purchase old George Cook’s 200 acre property with overgrown vineyards, they jumped at it.

They were aware that there could be protests as they de-forested parts of the mountain to form the best vineyard sites.  While inspecting each vineyard location from his all-terrain vehicle, I found Stuart to be someone who cares deeply about the madrone forest and the soil, while using eco-friendly farming practices in his vineyards.

Charles Smith serves as the winemaker and storyteller at the winery.  I caught up with him as he was leading a small group of out-of-state tourists through their story and palate of wines.

The Smith Brothers like to keep it simple and consistent.  They produce about 3,000 cases per vintage of the same four wines,

focused on creating the best in each from what Mother Nature gives them.

The tasting began with a dry-farmed estate release, the 2015 Smith-Madrone Chardonnay ($34) that concurrently expressed complexity and accessibility.  Barrel-fermented for ten months in 80% new French oak, the flavors were layered and balanced, not overly crisp or creamy.

Riesling production is no longer associated with the Napa Valley, but there is a history.  Over the years, chardonnay has nearly dominated it out of existence.  However, the 2015 Smith-Madrone Estate Riesling ($32) is among the finest California releases that I have tasted.  While I agree in part with Charles’ assessment that their riesling is more full-bodied French style (Alsatian) than German, the  expressive minerality on the finish is reminiscent of those from Germany’s Mosel region along the Rhine River.

The climate on Spring Mountain is warmer like Alsace, allowing the grapes to ripen earlier.  With the 2015 vintage, the result is a dry, crisp wine with citric and floral qualities and an exceptional mineral-laced finish.  They make less than 700 cases, but this wine is worth pursuing.

The drought in California was in full effect in 2014 when rainfall on Spring Mountain, at 1800-foot elevation, was less than half of normal.  As a result, the cabernet sauvignon and other Bordeaux varietals, from volcanic soil, developed smaller clusters with more concentrated flavors.

The 2014 Smith-Madrone Cabernet Sauvignon ($52), blended with small amounts of cabernet franc and merlot, has a rich mouthfeel

with flavors that coalesced on the palate.  With nearly 2,000 cases produced, it is aged for 18 months in mostly new French oak and will certainly evolve for several years.

A blend of the best blocks of cabernet sauvignon (58%), merlot (17%) and cabernet franc (25%), the “Cook’s Flat” Reserve is only produced when the highest standards can be achieved.

As opposed to some overbearing fruity wines, the 2012 Smith-Madrone “Cook’s Flat” Reserve ($225) is a refined release with deeply balanced flavors, made, according to Charles Smith, in an “Old World” style. He credits the cabernet franc for adding depth and complexity to the wine.

Charles and Stuart in the early 1970s

The Smith Brothers have been doing what they do on Spring Mountain for forty-seven years.  As a result, they have gotten good at it.  Although the remote Spring Mountain vineyards are more difficult to access, an appointment to tour and taste at Smith-Madrone will prove to be a unique experience.

Lyle is a freelance writer who specializes in “lifestyle” issues like wine, food, travel, music, film and memoir. He currently writes “On The Vine,” a weekly wine column for the San Francisco Examiner. END_OF_DOCUMENT_TOKEN_TO_BE_REPLACED
This entry was posted on Friday, November 2nd, 2018 at 5:31 pm and posted in Wine. You can follow any responses to this entry through the RSS 2.0 feed.
« Chilean Pinot Noir
Somm 3 Celebrates California Wine’s Epic Story »