Experimentation is a distinctive characteristic of wine makers who began, as hobbyists, making wine in their garages.  They embrace trial and error out of necessity and, as a result, learn to think out of the box. Such is true with Dave McGee, founder of Monochrome Wines, the only Paso Robles winery that focuses exclusively on white varietals and unorthodox blends.

Aside from a few fine white Rhone blends, the Paso Robles region is known for world-class red Rhone blends and zinfandel which begs the question, “Why the focus on whites here?”

Half joking, Dave explained that it gets very hot during Paso’s summer season and he and his wife prefer to drink cooler white wines.  They are also weary of the myth that white wines are simplistic, lacking in-depth and beneath most serious wine drinkers. 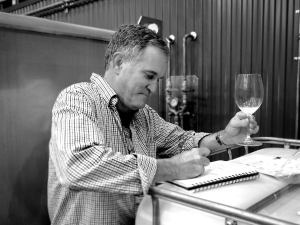 To prove his point, Dave decided to take his focus on avant-garde white blends and plant it in the middle of red wine country. I wonder if the property values have begun to fall?

McGee is a transplant from the Bay Area and after three degrees from Stanford and a long career, he fled the rat race for the green hills of Paso Robles wine country.  When asked if wine was his second career, he said, “Actually, it’s my fifth or sixth.”

After years of planning, tracking California weather patterns and comparing them to the noted European regions, the McGees founded Monochrome Wines in 2016, intent on changing faulty perceptions of white wines.

From the first taste, the 2017 Monochrome “Barrel Distortion” ($35), a 100% albarino sourced from the Plum Orchard Vineyard in the nearby Templeton Gap AVA, challenged my perceptions and became a new paradigm.

McGee understands that the creation of captivating wines begins with the best fruit.  To that end, he has secured grapes from known 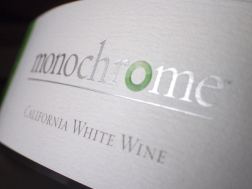 sources in the central coast and north Santa Barbara County including the Zaca Mesa Vineyard in the Santa Ynez Valley and the nearby Happy Canyon Vineyard, a long-time producer of quality sauvignon blanc.

Having spent much of this decade avoiding red meat and eating more seafood and vegetables, I enjoy complex white wines that pair well with food such as the 2017 Monochrome “Neither Here Nor There” ($38), a distinct blend of sauvignon blanc and chenin blanc, both with origins from different parts of France’s Loire Valley.

Sancerre and the nearby Poiully Fume’ region produce extraordinary sauvignon blanc that is, by nature, very dry.  Chenin blanc is produced to the south and is more versatile in its flavor and texture profile with different regions like Vouvray or Anjou.

Origins aside, “Neither Here Nor There” claims its identity from California terroir and is barrel, not stainless steel aged, hence the name.

The individual varietals in Monochrome wines are fermented separately, then carefully blended later under the close scrutiny of Dave and consulting winemaker, Riley Hubbard, resulting in inventive wines like the 2017 Monochrome “Altered Images” ($40), a blend of chardonnay and chenin blanc and the 2016 Monochrome “Analogue in a Digital Age” ($38), a blend of marsanne (81%) and chardonnay (19%) that is aged separately in earthenware amphoras, used 8,000 years ago and oak barrels, in use for only 2,000 years, to achieve a contemporary result.

Monochrome currently produces about 500 cases per vintage but looks to expand to 2,000 cases and has many new releases on the horizon.

A growing trend among smaller production wineries, the easiest way to access Monochrome wines, aside from a few local restaurants, is by direct to consumer shipments through their growing two-tiered membership program that guarantees seasonal releases.

Monochrome also has a small tasting room south of the town of Paso Robles where Dave McGee personally pours current vintages and provides insights into his passion of create complex, memorable white wines.

Whether a connoisseur or someone who simply enjoys white wines, Monochrome’s mission to explore their intricacies is something not to be overlooked. They have certainly made me a believer.

Lyle is a freelance writer who specializes in “lifestyle” issues like wine, food, travel, music, film and memoir. He currently writes “On The Vine,” a weekly wine column for the San Francisco Examiner. END_OF_DOCUMENT_TOKEN_TO_BE_REPLACED
This entry was posted on Thursday, February 21st, 2019 at 5:41 pm and posted in Wine. You can follow any responses to this entry through the RSS 2.0 feed.
« Clos du Val Winery continues to make history
Sonoma County wineries lead the way in direct to consumer shipments »