A new generation puts its stamp on Ramey Wine Cellars

Ramey Wine Cellars has established itself, over many years, as one of this country’s top wineries.  Founder David Ramey has been in Sonoma County for over 40 years and founded his iconic winery in 1996, focusing primarily of cabernet sauvignon, chardonnay and syrah.  He is credited with using Old World methods such as sur lie aging and malolactic fermentation to create the California-style

The winery has recently transformed and a new family generation is working with the established team and winemaking staff to lead Ramey into the future. After graduating from college and being encouraged to pursue their own careers, David and Carla’s children, Claire (28) and Alan (26) were drawn to the family wine business. Today, Claire works with her father, Winemaker Cameron Frey and Associate Winemaker Lydia Cummins in pre-production while Alan handles marketing, trade, consumer tastings and the launch of a multi-tiered wine club. They both have earned the titles of “co-owner.”

I recently had a chance to sit down with the new winemaking team at 25 Lusk in San Francisco to taste their current releases and discuss the future of Ramey Wine Cellars. What better way to do that than to enjoy the pairings of extraordinary food and wine.

The evening opened with a glass of a Lodi-grown 100% kerner from Sidebar, Ramey’s sister label.  Lydia Cummins, who serves as the

winemaker for the sibling brand, explained that the Sidebar 2018 Kerner Mokelumne River ($25) originates from a sub-appellation in the Lodi region, the only planting in California. Its  German origins, where it is primarily blended with other grapes, are defined as a cross between riesling and trollinger, resulting in an aromatic, dry wine with spice overtones. This kerner is whole-cluster pressed, stainless steel aged and may be your best opportunity to experience what the grape has to offer.

Lydia also spoke of what she called “a harvest spirit” that exists at Ramey, one that nurtures creativity and networking, usually over a glass of wine at the end of the day.  The camaraderie among the staff was obvious as we all enjoyed conversation and some laughs to pair with the kerner.

We assembled in the Ogden Room at 25 Lusk to enjoy dinner paired with two current Ramey chardonnay releases, a pinot noir and a syrah from the Rodgers Creek Vineyard in the Petaluma Gap.  As we were seated, it was pointed out by our server that then POTUS Barack Obama dined in this same room during his second term.

Pairing caviar served with traditional blini, we enjoyed a 2015 Ramey Chardonnay Woolsey Vineyard ($65), from a Martinelli family owned vineyard, sourced exclusively by Ramey.  Winemaker Cameron Frey explained that sourcing the best grapes is the key to Ramey’s success. This wine is whole-cluster pressed, unfiltered with full malo-lactic fermentation and batonnage, resulting in a nice balance of richness and austerity

Not that it’s all about me, but my favorite wine of the evening was the expressive 2015 Ramey Chardonnay, Rochioli 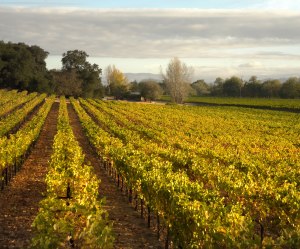 Vineyard Russian River Valley ($65), rich with a bright acidity.  Frey clarified that, although Ramey has been sourcing grapes from this known vineyard for ten years, this is their first single-vineyard release.

The balance and mouthfeel of this pinot, according to Cameron Frey, is achieved through sur lie aging with monthly stirrings and a light fining with egg whites to soften the tannins. It deserves to be a fixture at the dinner table.

The evening concluded with a 2014 Ramey Syrah Rodgers Creek Vineyard Sonoma Coast ($65) from the cooler Petaluma Gap, co-fermented with 10% viognier and  described as “northern Rhonish” in style.

The layered bouquet and flavors of this wine were best described last year by critic Antonio Galloni: “The Rodgers Creek offers a very appealing interplay of dense fruit and lifted aromatics, with enough structure to develop nicely in bottle for many years to come.”

On this evening, Claire, Alan, Cameron, Lydia and the current releases aptly represented David Ramey’s passion and left an impression that Ramey Wine Cellars will continue to evolve with the “harvest spirit” that founded it.

Lyle is a freelance writer who specializes in “lifestyle” issues like wine, food, travel, music, film and memoir. He currently writes “On The Vine,” a weekly wine column for the San Francisco Examiner. END_OF_DOCUMENT_TOKEN_TO_BE_REPLACED
This entry was posted on Thursday, June 6th, 2019 at 5:26 am and posted in Wine. You can follow any responses to this entry through the RSS 2.0 feed.
« The Sonoma Distilling Company opens its doors to the public
Her River Runs Through Me »