The Many Faces of Grenache

The grenache grape is many things to many wines.  It is one of the most prolifically planted grapes in the world, a dominant component in some of the most famous blends, yet, individually, it is shy, content to support other grapes in famous blends from the Rhone Valley in southern France, the Rioja region in northern Spain and the “GSM” blends from southern Australia.  It is diverse, known as granacha in Spain, cannonau on the island of

Sardinia and grenache in France, each proclaiming it as their own. In fact, for centuries, all of these regions were under the Crown of Aragon which my research shows began in the 10th Century with the marriage of Petronilla of Aragon and Ramon Bereguer of Barcelona.

By the 14th and 15th Centuries, the Crown of Aragon controlled regions of Catalonia (northern Spain), Athens (Greece),Majorca (Spain), Provence (southern France), Naples, Sardinia, Sicily (Italy) and others. With plantings of grenache dating back that far, it is probable that the proliferation of plantings happened during this time period.  It seems that Petronilla and Ramon shared the wealth.  Simply put, grenache was born on both sides of the Pyreness Mountains where it is still grown abundantly today.

Best from low yield vines, grenache is berry-flavored, mostly strawberry and raspberry, peppery, soft on the palate and produces wine with a high alcohol content.  It also lacks acid, tannins and color which is why it most often blended with other varietals that can support its deficiencies. Although, grenache is the most dominant varietal in eighty-percent of the blends from the Chateaunef-du-Pape appellation in southern France, known throughout as one of the world’s best.  In all the southern Rhone Valley appellations, grenache, syrah and mourvedre, sometimes with support from cinsault and counnoise are blended to form, arguably, the finest wines on the planet, with apologies to Burgundy, Bordeaux, Tuscany and California.

E. Guigal is a notable wine producer in the Rhone Valley whose releases range from value to collectible wines and are accessible to the U.Sconsumer.  For those interested in experiencing a good Rhone blend, the grenache dominant 2010 E Guigal Chateaunef-du-Pape($40)is 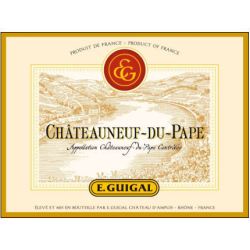 available on-line and at many wine shops.  This wine had lengthy bottle aging prior to release and received ratings in the mid-nineties from Wine Spectator and Robert Parker.

In South Australia, grenache is abundantly planted and is, again, a major player in their “GSM” blends or, as I refer to them, Rhone blends on steroids.  The heat and overall warmer climate in the southern hemisphere enhances the fruit flavors of grenache, syrah, mourvedre and Spain’s tempranillo.  The Aussies even call their syrah by a different name to accentuate the difference in styles.  The new name, shiraz, has a flamboyancy that fits its persona.  An Australian “GSM” blend is, generally, a soft, fruit-forward, accessible wine to enjoy with friends, but the more austere Rhone Valley wines are by far the best to pair with food.  One of the San Francisco Bay Area’s top restaurants, Sonoma’s, “The Girl and the Fig,” has an extensive wine list, all from the Rhone Valley.

In Spain, granacha is the common varietal that is blended with tempranillo to create those popular and acclaimed wines from the Rioja region, south of Bilbao.  Cannonau wine from Sardinia is available for very reasonable prices.  Years ago I had to opportunity to taste a vintage of the Cannonau di Sardegna ($16), a wine that Robert Parker proclaimed one of the world’s best wines under $25, and my memory is of floral,

perfumed aromas and a lighter texture.

In California, Rhone Rangers from Paso Robles, the Santa Ynez Valley and other regions are using grenache to produce the best blends outside of the Rhone Valley.  Paso Robles wineries like Linne Colado, Terry Hoague and Tablas Creek produce excellent 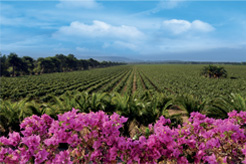 Vineyard on the island of Sardinia

Among other highly touted Rhone blends, Justin and Heather Smith have produced a grenache dominant blend for the past ten years that has given them great reviews and notoriety.  Wine Spectator magazine, after placing the 2006 Saxum “Broken Stones”($45/96pt) twelfth of the 2009 list, awarded the rich and layered 2007 Saxum James Berry Vineyard ($68) blend a 98-point rating, naming it their 2010 Wine of the Year. I treat myself to a few bottles of Saxum releases each year and the consistent quality is extraordinary, as good as any blend from Chateaunef-du-Pape.  In addition to the James Berry Vineyards, Saxum produces

two other blends:  “Bone Rock” and “Broken Stones,” also exceptional, but there is a downside.  With the accolades, Saxum wines have become difficult to acquire and now cost nearly $100 per bottle.

The signature of many California wineries is releasing single-varietal wines, including grenache.  It has emerged from several regions of the state, but mostly from the Santa Ynez Valley in Santa Barbara County, Paso Robles, Calaveras County in the gold country and Monterey County.

From one of Paso Robles’ most distinguished producers, The 2013 Adelaida Grenache Anna’s vineyard ($36) is a personal favorite.  I have tasted several vintages of this wine and it alway has classic aromas of strawberry and spice, adding black cherry flavors.

Just blocks off the main square, in an old train depot, the local family owned Anglim Winery produces a variety of wines including the 2012 Anglim Grenache Willow Creek District ($38), boasting wild strawberry on the nose and palate.

Bonny Doon Cellars is a leader in producing California Rhone blends and, has recently added some very fine vineyard designate

syrah, mourvedre and three all grenache releases from vineyards in Monterey County, all currently in my cellar.  With a 92-point rating, Planet Grape described the 2014 Bonny Doon Grenache Cuvee’“R” ($48) as “pure, expressive, old-vine grenache.” The newly released, limited production 2014 Bonny Doon Grenache ($24) is a nicely balanced wine that was born to accompany grilled seafood like ahi tuna or salmon.  Detailed as a “food and wallet friendly” wine, each vintage, including the 2014 Bonny Doon “Clos du Gilroy” Grenache ($20), with small amounts of syrah and mourvedre added, is consistently listed as a top value wine.

The success of  Santa Ynez Valley’s production of quality grenache releases prompted a “Grenache Wars” event in Los Angeles last year, pitting their wines against Paso Robles releases intended to promote the varietal that has had limited respect over the years. Among the best include the 2010 Tercero Grenache Larner Vineyard ($35)from the Ballard Canyon area near Solvang and the 2012 Jaffurs Grenache ($34), a well rated, supple wine made from grapes in three area vineyards.

Several years ago, I had an opportunity to walk with Ampelos Cellars owner/winemaker Peter Work through his organic/biodynamic Ampelos Vineyard in the renowned Santa Rita Hills appellation near Lompoc.  A rare varietal in this region, the 2012 Ampelos Santa Rita Hills Grenache-Delta ($37) is an exceptional wine that benefits from its extended growing period, great soil and 33 months aging in the barrel. 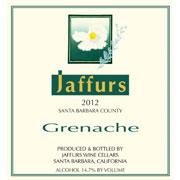 A lesser known region, Calaveras County has been producing high quality wines for decades, including many Rhone varietals.  I am familiar with two grenache releases from this area that represent very  distinctive styles.  Each year, Twisted Oak Winery, near Angels Camp produces a 100% granacha and the recent 2013 Twisted Oak “Torcido” Granacha ($37) is a bold wine with dark ruby colors that pairs well with meats like spicy sausage.  Grapes from the Dalton Vineyard in San Andreas are sourced for the 2013 Val du Vino “Giselle” Grenache Dalton Vineyard ($27), a lighter wine that pairs well with turkey. Offering Rhone and other varietals at the tasting room in Murphys, CA, I first discovered Val du Vino wines at a private winemakers dinner, hosted by owner/winemakers Jonathan Phillips and Jeannine Hebel, a renowned French chef.

Grenache is everywhere, a major part of the masterfully woven Rhone blends, the well-aged wines from Rioja, the fruit-forward “GSM” blends from South Australia, the fragrance of cannonau and California, where it is pushed in many different directions.  Its expressions of fruit and spice are always evident but never overbearing.  Grenache has withstood the test of time and continues to prove its worthiness as one of the world’s most significant wine grapes.