Penedes and the Spanish Cava Trail 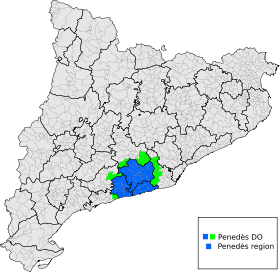 We often refer to sparkling wine as champagne, when if fact that name is only permitted if referencing what is produced in the Champagne region of France.  While made in the same “methode champenoise”, the sparkling wine of Spain is called “cava” and there are an abundance of producers in Penedes.  I recently had the opportunity to explore the “cava trail” in this region and taste cava at Pares Balta, who also create a number of quality still wines.

Part of Catalonia, Spain, Vilafranca del Penedes is situated between the steep Monserrat Mountains and the Mediterranean Sea. 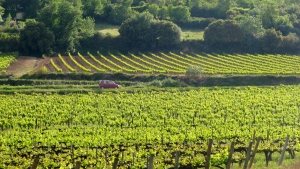 While cava’s ancestry is traced to the nearby Codorniu estate, Penedes is where it thrives today.

Widely considered one of the top growing areas, Penedes is a designated Denominacio d’Origen (DO) for wine and cava and one of the most ancient viticulture regions in all of Europe. A blessing in disguise, the generally poor-quality soils, heavy in limestone and fossil matter, can and do stress the grapes into highly concentrated flavors.

As with champagne, the blended white grapes are introduced to sugar and yeast in the bottle.  The second fermentation, lasting 12 months, creates carbon dioxide and those wonderful bubbles.  While viura is the dominant white grape in the Rioja, little known varietals like parellada, xarel.lo and macabeo are blended for both cava and still wines and seem to respond well to both methods 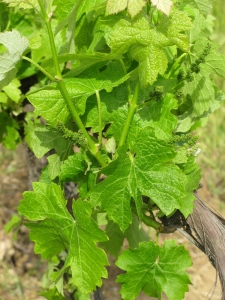 Following the morning at a monastery atop the Monserrat Mountains, we began our tour and tasting at Pares Balta, who have farmed the same vineyards since 1790.  The family has planted over 200 hectares (approx. 500 acres) in a unique terroir influenced by the coastal breezes and calcareous soils with an abundant of limestone at the surface.

Pares Balta has always practiced organic and biodynamic farming, but received certification in 2004.  While the winery is still owned by the grandsons of the founder, the winemaking and oenology is the responsibility of their wives, Maria Elena Jimenez and Marta Casas.  Rooted in cava, Pares Balta, over the past 25 years, have opened out to nearly 20 releases, a majority of which are red wines.

In a misty rain, our hostess, June Ordaz gave us a quick tour of the biodynamic, sustainable vineyards.  Organic farmers are fascinating in 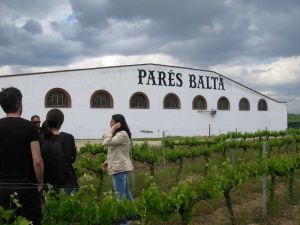 their creativity for plant survival such as hanging female hormones on the vines to falsely attract bees to help with pollination. Also, the wild grasses and legumes planted between the vines keeps the soil loose and re-charged with nutrients.

With one exception, all Pares Balta wines are estate grown.  All varietals are harvested August through October and are fermented individually for 3-5 years before blending. The results would soon be revealed as we began our tasting.

A blend of three white grapes, the Pares Balta Cava Brut is very fruit forward for a sparkling wine.  Parellada, the dominant grape known for adding floral notes to wines, certainly lived up to its reputation here. This cava is dry, but full-bodied and a good value for under $20.

With fermentation in stainless steel tanks, the Pares Balta Blanc de Pacs exudes a nice crispness and, once again, the parellada adds floral notes to the bouquet and orchard fruits to the flavor. By contrast, the Pares Balta Calcari 2009, utilizing the xarel.lo grape exclusively, has a negligible nose, but full flavors and a higher, yet balanced acidity.

Another value at under $20, the cabernet sauvignon and Grenache-blended Pares Balta Mas Petit 2009 has soft fruit aromas and flavors with a unique minerality and gentle spices throughout.  This wine is both smooth and accessible to most palates.

A blend of cabernet sauvignon, merlot and cabernet franc, the winemakers use malolactic fermentation to create the soft elegant flavors of the Pares Balta Mas Elena 2010, an excellent value for the price. Hints of spice from the nose through the finish add complexity to the wine.

Our final tasting was an import from Priorat, Spain’s other significant wine region, known for unique slate and quartz soil called licorella that adds minerality to the flavors.  Blended primarily with Grenache (60%), carinena (25%) and small amounts of cabernet sauvignon and syrah, the 2007 Gratavinum Priorat 2 Pi R (the mathematical formula) has a nice earthiness throughout that generated comments from other tasters about the aromas and flavors of mushrooms balanced with raspberries and other fruits. 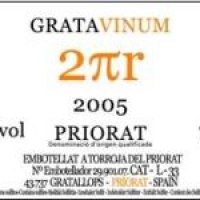 The Gran Reserva designation of this wine requires that the juice spend two years in the barrel and another three in the bottle. Although it has a higher price point, the “2 Pi R”, represents the finest example of why Priorat wines are considered among the most expressive in Europe.

The regions of Rioja, Penedes and Priorat, along with Ribera del Duero, make up the “Big Four” of Spain’s wine production.  Ribera del Duero, on the northern plain north of Madrid, produces bold tempranillo-based red wines such as Emilio Morro, that are occasionally available locally.

I have found cava brut and other Spanish wines from various regions at various outlets.  Further exploration of regional stores such as K&L Wines in Hollywood or Monopole Wines in Pasadena can uncover a plethora of still and sparkling wines and serve as a resource for discovering good values. 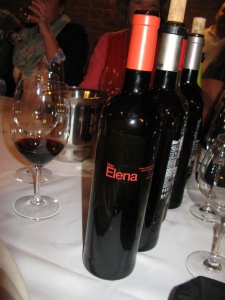 Robert Parker certainly predicted the world’s prolonged interest in Spanish wines that will only get better and more approachable in time.  The Spanish soils are pushing these grapes in unique directions, resulting in consistent characteristics that experts can identify blindly. Anyone interested in good wine owes it to themselves to delve into what the excitement is 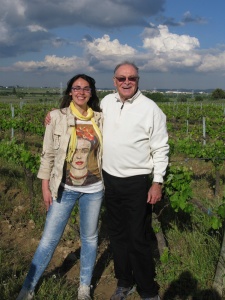 with June Ordaz of Pares Balta

all about and experience the wines of Espana.