October 7, 2017 was not an ordinary Saturday. We joined friends on a fancy tour bus for the ninety minute ride from Santa Rosa to Middletown, then up the mountain to the hydro-thermal power compound known as “The Geysers.”   Returning in the afternoon from Calistoga, the bus drove through the pass that became Mark Springs Road because it was the fastest and most accessible route.

Passing by the entrance to Safari West, an African animal preserve prompted discussion on who had been there

“We were there last month,” I said

Weeks before, in late August, out-of-town guests enthusiastically requested Safari West, a four-hundred-acre African preserve and breeding center, as a top priority during their short visit.  I either never knew or had forgotten that such a place existed northeast of Santa Rosa.  However, I was game and loved being around it.

On a warm morning, we arrived and soon met our guide and jeep driver, Cindy.  With dusty Levi’s, a khaki workshirt and the baked skin of someone who spends their days in our local Serengeti Plain, she was surely a seasoned veteran, comforting to our group.

Cindy explained that we would soon board what looked like a worn World War II surplus jeep retrofitted with a second level of seating for four people above the cab and a long gear shift protruding from the floor to the right of the driver. She  referred to the old jeep as her partner and I had full confidence in both.

First on our day’s agenda, before boarding the jeep, was some intense bird-watching, then viewing primates and predator cats that, for obvious reasons are prohibited from roaming freely among the appreciative prey on the preserve.

I have seen flamingos before, but never heard them make a sound.  We came upon a crowded colony of various shades of pink that, at times, sounded like an entire 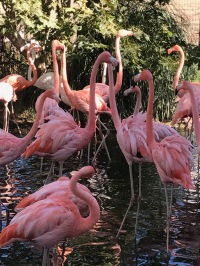 section of Type-A violinists who played and argued with each other simultaneously.  The crescendo came in waves.  One flamingo would annoy another, others, who I called shamers, would join in to escalate the volume and ferocity of the screeches, lowering their heads and projecting their necks forward like a weapon.  The colony moved from tranquil fluidity to chaotic dysfunction and back again within seconds. Watching their behavior made me think of the parallels between us and them.

After carefully cleaning the bottoms of our shoes, we entered the large aviary.  In trees and on the ground, we were surrounded by scarlet ibis, Argus pheasants, crown cranes,  Stanley cranes and a unique demoiselle crane named Kovu, who literally had no clue that she was a bird.  Some abandoned crane eggs were hatched in an incubator, producing Kovu, 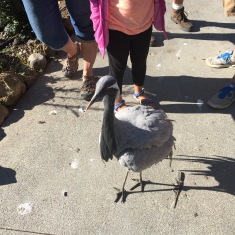 who was then hand feed by humans.  During both her formation and formative years, Kovu bonded with people, not cranes or birds at all.

She soon joined our group and participated in the walking tour. She stopped and started walking with us and seemed to enjoy observing these engaging winged creatures that surrounded us.  Cindy pointed out that she has, in the past, taken a particular liking to a specific person, prompting her to raise and spread her wings, strutting around ceremoniously in circles.

Moments later, I stepped back and accidentally nudged Kovu. I apologized.  She stared at me for a instant and then the “love dance” began. I became the one.   She pulled her wings back and, in full display, began to dance in circles just for me. I was embarrassed and flattered at the same time. At my age, it’s nice to have appeal, even by a demoiselle crane who thinks more like a girlfriend than being a bird. 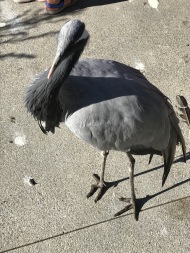 “Stand back Kovu.” Cindy delivered the disappointing news to our young friend, who had expectations of leaving the aviary and joining us for the rest of the tour.

After viewing the caged cats and before boarding the jeep, we observed several Black and White Colobus monkeys swinging from branches and moving quickly on the ground. Each one of these gorgeous creatures had a distinct black body with a white cape-like streak down it’s back and a ring of white fur that surrounded their entire face.

Colobus is the Greek word for “mutilate” and unlike any  other primates, these beautiful creatures, genetically, have no thumbs. They are also herbivores with a digestive system that enables the consumption of a variety of leaves, flowers and twigs.  Their sloppy eating habits and digestive systems are said to be vital to seed distribution.  It’s difficult to be neat without thumbs.

“Who wants to sit up top first?” asked Cindy as we boarded the jeep.  A young family of four jumped at the chance and were doubly pleased when we offered them our turn.

Buckled in, we started up the bumpy road.  Entering each section of the preserve required that Cindy stop and exit the jeep, unlock and open a gate, re-enter, start up the vehicle and move a few feet forward, stop and exit once again to lock the gate behind us.  She did this several times during the tour.  After all, this is old school Safari West, not Jurassic Park.

The first series of corrals belonged to five or six large giraffes with enough acreage to roam freely.

Cindy spoke.  “Thirty-six giraffes have been born here and we believe that Jamala, who is celebrating her twentieth birthday today, may be pregnant.”   She definitely was. When she turned, we were all surprised to see parts of two hoofed legs protruding from her.

Cindy quickly grabbed her radio.  “This is Cindy. Are you aware that Jamala is giving birth.”

A voice was transmitted.  “Yes, we’ve been monitoring her the last hour.”

“Does she need help?”

“We’re going to give her some time.”

“I knew that young Rico was up to no good.” Cindy smiled.

“Yeah, he was pretty active in the short time he was here.”

Rico was a nine-year-old male giraffe that was brought into the preserve to stimulate some growth to the herd.  Apparently, his activity level was so high that his stay was shortened.

Not knowing how long the birth process would take, Cindy suggested that we proceed with our tour but quickly return after any updates.

In the next minutes we encountered ostriches, water buffalo, varieties of antelopes and an interesting zebra dynamic.  We came upon three female zebras, standing side by side, intently observing a young male eating. 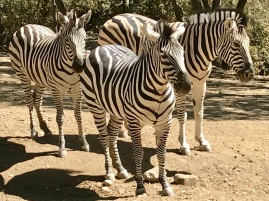 “They shunned and were downright  mean to him when he first arrived,” said Cindy, “but after awhile, they all warmed up.”

The expressions of the tirelessly observant females seemed to say, “Isn’t he handsome when he eats?”

After listening to a scratchy voice over the radio, Cindy said, “It’s time to get back to Jamala.” 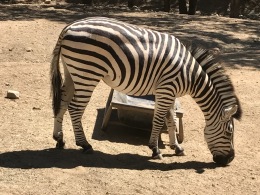 We returned to the sight of two young women pulling on rope lines that had been secured around the calf’s hoofs, now below a dangling head and neck. This tug-of-war continued for several minutes before reinforcement arrived in the form of two more young women.

The giraffe corrals looked like one large square corral, divided into four equal parts. Although Jamala was separated, a six-foot fence could not keep the others giraffes from surrounding her with comfort and support.  They did not interfere, they were just there for her. One last tug by the young quartet and the new miracle of  life slid from the mother 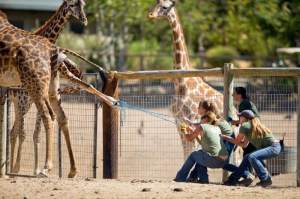 and fell six feet to the ground.

The calf looked dazed for a moment and then began, in vain, to stand up.  Due to predators, standing is a top priority for baby giraffes.  After many wobbly, futile attempts, the twenty-minute-old calf finally stood up and a minute later was nursing.

Jamala tended to her new offspring, cleaned her up and, within  the forty minutes, we observed a new six-foot-tall baby giraffe walking steadily, looking a month, not an hour old.

She shared her wonderful birthday present with a small, fortunate group of people and supportive giraffes. The four interns were exhausted, but running high on 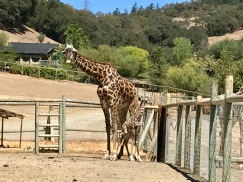 adrenaline.  We all shared a moment and a lifelong memory together, but theirs were up close and personal.

My story was convincing.  All on the bus agreed that we would go soon, together.

In the late hours of Sunday October 8, the Tubbs Fire ravaged through the same pass that we had traveled a day before and burned parts of Safari West.  After directing the staff to evacuate, owner Peter Lang, stayed behind and strung together ten garden hoses to hold it at bay. N one of the living creatures at the preserve were harmed.  The same could not be said for Lang’s home and a fleet of old, worn surplus jeeps with special seating above the cab.

Heroically, Peter Lang not only saved these beautiful creatures, but future 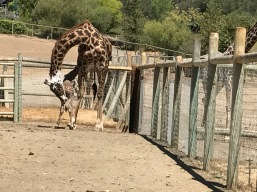 opportunities for us to observe all facets of their complex lives, including the miracle of birth.

Safari West can be life changing.  At a minimum, it reminds us of what we have known all along and may have forgotten. We are part of a balance that is both precious and fragile. Although humans have benefitted from being able to walk and use our hands simultaneously, we still share an eco-system and a an obligation to nourish and protect it.

On October 19, our family welcomed Drew Sofia Norton, into the world. Her parents 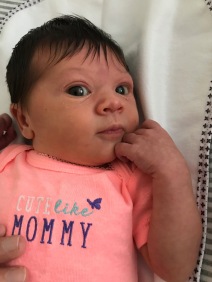 and Jamala experienced the miracle of birth months apart. I hope that this beautiful baby, precious forever and fragile for the short-term, will embrace and celebrate all living things in our world. Visiting Safari West in a few years may give her a head start.

Lyle is a freelance writer who specializes in “lifestyle” issues like wine, food, travel, music, film and memoir. He currently writes “On The Vine,” a weekly wine column for the San Francisco Examiner. END_OF_DOCUMENT_TOKEN_TO_BE_REPLACED
This entry was posted on Thursday, October 26th, 2017 at 7:59 pm and posted in Memoir, Travel. You can follow any responses to this entry through the RSS 2.0 feed.
« Turley Wine Cellars: A Profile of Diversity
The Rhones »