While reading a recent Wine Spectator magazine article extolling the virtues of the current releases from the Rhone Valley in southern France, I was reminded of our recent travels to Chateaunef-du-Pape and of how much I favor the blends from the southern valley.

The approach to winemaking in the northern Rhone Valley is simpler because they focus only on syrah and a few white varietals. The exceptional syrah from known appellations like Cote du Rhone, Crozes-Hermitage and Cotie-Rotie is arguably the world’s best.

Wine Spectator has given the entire 2016 vintage a rating range of 94-97 points, comfortably in the “classic wine” designation.  The earlier 2015 vintage was awarded an astounding 99 points.

In contrast, the wines from the southern Rhone are all blends of seven grapes for the reds and six for the whites.  The renown southern Rhone red blends from 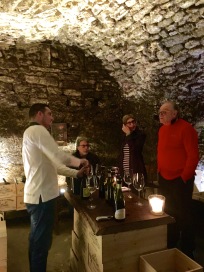 Chateaunef-du-Pape, Gigondas, Vacqueyras and others north of Avignon, feature a backbone of Grenache, Syrah and Mourvedre. The other permitted red varietals, counoise, cinsault, clairette and carignan are used mainly in a supporting role.

White Rhone blends, whether from the southern Rhone Valley or California have become, for me, a consist alternative to chardonnay or sauvignon blanc. The most recognizable grapes used in the white blends are grenache blanc, marsanne, roussane and viognier.  Lesser known varietals picpoul and bourboulenc are becoming more present in blends featured on restaurant wine lists.

As is commonly the case, most of the credit for these great Rhone valley wines is given to the soil.  During a recent visit to the Chateaunef-du-pape appellation, I was surprised to see large stones covering the top soil looking like they were purposely dumped there.  These stones, described as galets, consist mostly of limestone and 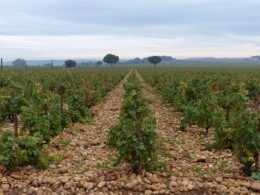 Stone galets in a Chateaunef-du-Pape vineyard

serve to insulate the roots from the region’s cool evenings.  I have not seen soils like this anywhere else.

As one may guess from the current ratings, Rhone Valley wines are very expensive and sometimes rare. Some recent research revealed their availability ranging from moderately priced to more high-end.  Also, we are fortunate that regions in California, including Paso Robles, are producing world-class Rhone blends right under our feet.

The following wines from both France and California are accessible on-line and in many wine outlets, representing some of the better values.

I am always interested in highly rated wines that sell for under twenty dollars.  The 2013 Château de Montfaucon “Baron Louis” Lirac $19/90-pt), a blend of grenache, syrah and cinsault, got my attention.  From the Lirac cru, located across 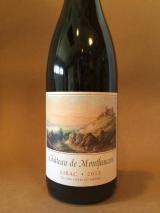 the river from Chateaunef-du-Pape, this wine has been defined as “comfort food in a glass” and promises ripe fruit and spice flavors.

We were fortunate to have tasted the 2015 Chateau de Vaudieu “Val de Dieu” Châteauneuf-du-Pape ($65/95-pt during our visit to the region last year. It was complex from the bouquet through the finish with intense, but balanced fruit, floral and spice flavors. 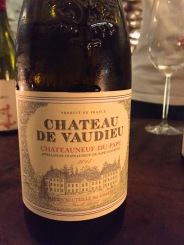 estate that is a patriarch of rhone wines in both France and California.  I am envious, but feel fortunate for our 2016 private tasting at the estate.

I found two releases including the 2009 Chateau de Beaucastel Chateaunef-du-Pape ($55/96-pt), a grenache and mourvedre dominant blend that fits the mold for a highly aromatic, full-bodied wine with impeccable structure.  Also available as a classic for collectors was a 1990 Chateau de Beaucastel Chateaunef-du-Pape ($200/96-pt).  Apparently, the 1989 and 1990 vintages were as outstanding as the current ones and this wine became part of Wine Spectators Top 100 Wines of 1993. Critic Janis Robinson, at that time used descriptors like “generous, concentrated, intense and mouth-filling” in her review.

Decades ago, Chateau de Beaucastel and the Perrin family partnered with the Haas family to create Tablas Creek Winery in Paso Robles, one of the early producers of fine Rhone blends in California.  They offer three traditional blends beginning with

Their finest large production Rhone blend, the “Esprit de Tablas” is, vintage to vintage, one of the finest blends in Paso.  Although I have not yet tasted the 2014 Tablas Creek “Esprit de Tablas” Paso Robles Rhône Blend ($50/92-pt) it has been consistently reviewed in the low to mid-nineties with familiar comments about floral tones on the nose, ripe berry flavors, balanced throughout with some mineralogy and spice on the finish.  Decanting this wine for a few hours will fully consummate the relationship with your palate.

With small productions of 800 and 880 cases respectively, two high-end Rhone blends, the Tablas Creek “Panoplie” $95/95-pt and the Tablas Creek “En Goberlet” ($55/92-pt)have eluded my palate but should be of interest to anyone serious about the Rhones.

At times, some California wine makers like to experiment with tradition and add

their own mark.  From a respected winemaker, the 2015 Orin Swift “Abstract” Rhone Blend ($30) adds petite sirah with grenache and syrah to create concentrated, balanced  flavors and a full mouthfeel.  Petite sirah is not permitted in the Rhone Valley, but is often used in California blends.

The Yorkville Highlands appellation in southern Mendocino County actually separate the Alexander Valley in north Sonoma County from the Anderson Valley.  The 2015 Halcón “Esquisto” Yorkville Highlands Rhône Blend ($28/92-pt), from that region, is a grenache dominant blend with mourvedre and a touch of syrah that has ample pepper and spice notes throughout.  Sterling, complex flavors make this wine a good value.

In early November, I receive shipments of a few special wines that I have purchased throughout the year.  Today, I received one of my indulges:  two bottles of Saxum “James Berry Vineyard” 2015, arguably the finest Rhone blend produced in this country, if not beyond.

Owner/winemaker Justin Smith, known as Paso Roble’s coolest winemaker, first received acclaim from this blend when it appeared within the top ten on an annual Wine Spectator list of exciting wines. In 2010, the Saxum “James Berry Vineyard” 2007 was named Wine Spectator Wine-of-the-Year. Since than, Smith has produced 38 wines with ratings of 95-points or higher.  The current release is a blend of grenache (33%), mourvedre (32%), syrah (24%) and counoise (11%) all sourced from his hilltop vineyard in the Willow Creek District of Paso Robles.

Rhone blends from Saxum are expensive and difficult to acquire, but the best needs mentioning. Now I can enjoy my vintage 2014 bottles.

With regard to northern Rhone-style single-varietal syrah, there are many readily available options in California.  With the potential for overly complex spicy flavors, I prefer that they are fully balanced and integrated.  Two of my personal favorites are the Dutton-Goldfield Cherry Ridge Syrah ($50)from the Russian River 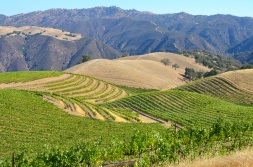 Valley and the Rusack Syrah Reserve Santa Barbara County ($44) from the Ballard Canyon Estate near Solvang, CA. Both need some time to breathe before serving.

Short ribs and a fine Rhone blend was one of my most memorable food pairings. The Rhone wines will also stand up to a holiday roast or prime rib. They also partner well with both aged sheep and cow cheeses or can just be savored with friends and a warm fire.

Lyle is a freelance writer who specializes in “lifestyle” issues like wine, food, travel, music, film and memoir. He currently writes “On The Vine,” a weekly wine column for the San Francisco Examiner. END_OF_DOCUMENT_TOKEN_TO_BE_REPLACED
This entry was posted on Sunday, November 12th, 2017 at 12:51 am and posted in rebecca pigeon, Wine. You can follow any responses to this entry through the RSS 2.0 feed.
« Precious and Fragile
Tasting “Sonoma Strong” »