Calistoga in north Napa Valley is a distinctive place to visit with surrounding mountain vistas, a quaint downtown, specialty shops and increasingly fine dining, geysers, mud baths, petrified forests and, of course, world-class wine.  Fine cabernet sauvignon, chardonnay and sauvignon blanc are still on top but local winemakers have experimented with other varietals since the early 1900s, including charbono, grown almost exclusively in the Calistoga area.  A vast majority of the sixty-five California acres planted in charbono are 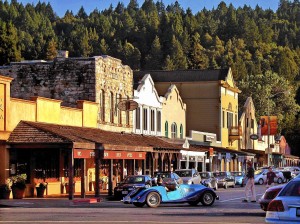 Introduced to California as charbonneau and also known globally as douce noir, corbeau or bonarda, the origin of charbono is Savoie, part of the French Alps near the Swiss border where it was harvested as a food friendly red varietal used to soften blends.  Late-ripening California charbono is generally simple in structure, fruit-forward and soft on the palate.

Charbono began as an Italian varietal in the Savoie region before it shifted to France in 1860. Today, it is behind only Malbec as the second most abundantly planted grape in Argentina where it is known as bonarda.  Several winemakers in Calistoga have adopted the grape and seem determined to keep it alive including Larry Summers who calls it “the Rodney Dangerfield of wine,” noting that few people know of its existence.

The old Inglenook winery imported barbera to the region, only to discover later that it was charbono, first bottling it in 1941. They remained the largest producer of charbono in the 1970s when vines also began to appear in Mendocino County 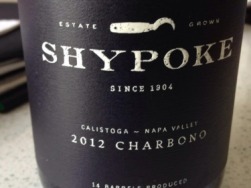 Pizza and charbono were on the menu at an event hosted by T-Vine Winery tasting room in Calistoga.  It began with a rare and earthy 1985 Inglenook Charbono.  The dark color and the deep, rich forest floor and tobacco leaf flavors were proof that the varietal benefits from aging.  Surprisingly, I have found this vintage on-line and at a local San Francisco outlet.

Winemaker Peter Heitz, great-grandson of immigrants who originally planted the vineyard in 1904, combined grapes with one planted in 1984 to produce nine barrels of the 2014 Shypoke Charbono Napa Valley Calistoga ($35) Herbal on the nose, the rich, tart fruit flavors exercise the palate.

Summers Winery, where I tasted my first Calistoga charbono years ago, was pouring two wines including the Summers Rose’ of Charbono 2014 ($30) that had a refreshing sweet and savory quality with hints of strawberries throughout.  It’s easy to recommend this unique wine.

Volcanic soil is prevalent throughout the Calistoga appellation including the estate Villa Andriana Vineyard that produced the nicely structured Summers Charbono 2014($34) with nutty aromas and restrained, complex flavors.  Some of these vines were affected by the recent Tubbs Fire that could impact future releases.

Dry-farmed and organic, the Tofanelli Family Vineyards in Calistoga has produced estate wines on this land since 1929. Their 2014 Tofanelli Estate Charbono ($43) blends 15% petite sirah for a richly textured wine that delivers a floral bouquet, ripened blueberry flavors and a slate finish.

A Calistoga boutique winery, August Briggs produces small lot wines in a prolific way.  Today, they have fifteen different releases with various varietals, all produced in

small amounts.  From two local vineyards, the August Briggs Calistoga Napa Valley Charbono 2014($38) was self-described as their best vintage.  It is an impressive 100% charbono and at the top of those tasted.  Rich texture, concentrated blueberry flavors and soft tannins bring an intricacy to the wine.

After tasting the August Briggs Calistoga Napa Valley Charbono 2006, I may differ with their assessment of the vintage 2014 as the best ever. The deep color and lush mouthfeel were beyond compare.  Enjoying the integrated, complex flavors, doughy tannins and long finish outweighed any need to dissect it.  I can only imagine tasting the vintage 2014 in 2026.

Whether you choose Calistoga for the natural beauty, exercise and health opportunities, fine dining or the wine, be reminded that it is the only place in the United States where we can spend a day exploring the charbono grape and the expressive wines it produces. 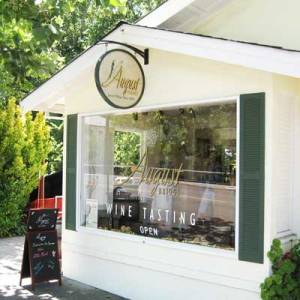 Charbono deserves our respect and wine lovers everywhere have a self-serving obligation to keep it alive and thriving.

Lyle is a freelance writer who specializes in “lifestyle” issues like wine, food, travel, music, film and memoir. He currently writes “On The Vine,” a weekly wine column for the San Francisco Examiner. END_OF_DOCUMENT_TOKEN_TO_BE_REPLACED
This entry was posted on Thursday, February 1st, 2018 at 2:11 am and posted in Travel, Wine. You can follow any responses to this entry through the RSS 2.0 feed.
« Edvins and Florencio
Richard Longoria Wines »