Years ago, while enjoying a dinner with friends at the Ballard Inn in the Santa Ynez Valley, we selected a local wine, the Richard Longoria Fe Ciega Vineyard Pinot Noir from the Santa Rita Hills.  The wine began my appreciation for cool-climate chardonnay and pinot noir from this appellation and of Richard as a winemaker who works the land.

Richard and Diana Longoria established their winery in 1982 after building a résumé with other local producers.  Richard’s desire to make wines in the Burgundian style and the

unique terroir of the region remains a successful partnership.

The Santa Rita Hills lie forty minutes up the coast from Santa Barbara on the north side of Point Concepcion, California’s only east-west coastal mountain range. The vineyards are directly exposed to cool nights, moderately warm days, wind and fog, protected only by the hills and valleys.  The soils are rocky, somewhat stressed and infused with marine sediment that helps to define the wines.

The Fe Ciega Vineyard is a great property in a prestigious neighborhood that includes Fiddlestix, Sweeney Canyon and Seasmoke vineyards among others.  The 2014 Longoria Chardonnay Fe Ciega Vineyard Santa Rita Hills ($50) is sourced from a few rows of Mt. Eden clone and is aged sur lee in only 26% new French oak.  Although Richard usually avoids malolactic

fermentation in his chardonnay releases, nearly three-quarters of this juice went through it.  There is a distinctive herbal, earthy quality to the flavors and a balanced acidity on the finish.

Longoria is cautious with new oak and doesn’t make any determinations until he analyzes the juice.  His signature wine, the 2014 Longoria Pinot Noir Fe Ciega Vineyard Santa Rita Hills ($55) was aged fifteen months in 40% new French oak resulting in complex herbal, fruit-forward flavors and soft, but clear tannins.  The “Fe Ciega,” which translates to “blind faith,” expresses the finer qualities of pinot noir in the appellation.

Whole-clustered pressed, the 2016 Longoria Chardonnay “Cuvee’ Diana” Santa Rita Hills ($45), with juice sourced from two vineyards, is aged separately for 14 months in 23% new oak, then blended before bottling.  The rich, creamy texture and baked fruit flavors explode on the palate and last through 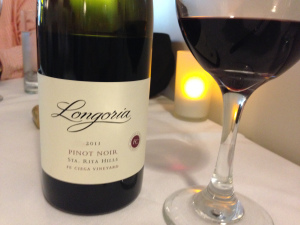 What a difference a vineyard can make.  Sanford and Benedict is one of the oldest and most respected vineyards in the Santa Rita Hills.  In contrast to the Fe Ciega release, the 2014 Longoria Pinot Noir Sanford and Benedict Vineyard Santa Rita Hills ($50), aged fifteen months in 39% new French oak, exudes big, bold cherry pie aromas and flavors.  Drinkable now, this wine will get even better with some time on the shelf.

Richard’s favorite varietal from the region is actually cabernet franc.  The problem with cabernet franc is that it suffers from an ailment called “cabernet sauvignon love.”  It can’t compete. Years ago, he began using it in a unique Bordeaux blend with added syrah.  Are the French scorning or just envious?  Re-launching the disguised cabernet franc, he called the annual blend, “Blues Cuvee’ to honor his love of blues and jazz.  Each label has original blues-themed artwork, a perfect gift for those passionate about vino and vibes.

To my fortune, Richard pulled out a twelve-year-old bottle of syrah from the Alisos Vineyard, cooler than most that produce it.  The 2006 Longoria Syrah Alisos Vineyard Santa Barbara County ($40) had spice notes, but the expressive flavors were so integrated and soft, I was surprised to find an alcohol level of 15.9 percent.

Two very different varietals, both sourced from the Clover Creek Vineyard in the Santa Ynez Valley, are worthy of mention. The 2016 Longoria Albarino Clover Creek Vineyard ($25), offers a spirited acidity and clean stone fruit on the palate.  In the late-harvest, dessert wine category, the 2012 Longoria Syrah “Vino Dulce” Santa Barbara County ($23) is at the top of my list.  Albeit 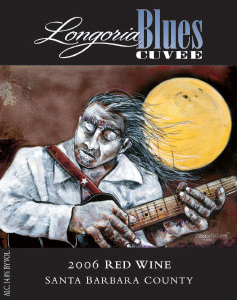 sweeter, the herbal, spice qualities of the grape, along with rich fruit and berry flavors, are expressed throughout.  To sip it after dinner is captivating, but to pair it with chocolate is simply decadent.

Tonight, in honor of Richard, his 2014 “Fe Ciega” pinot noir was perfectly paired with the 1979 Bill Evans’ “Paris Concert, Edition One” recording.  It’s always a pleasure to sip and listen to “Quiet Now.”

Lyle is a freelance writer who specializes in “lifestyle” issues like wine, food, travel, music, film and memoir. He currently writes “On The Vine,” a weekly wine column for the San Francisco Examiner. END_OF_DOCUMENT_TOKEN_TO_BE_REPLACED
This entry was posted on Thursday, February 22nd, 2018 at 5:21 pm and posted in Wine. You can follow any responses to this entry through the RSS 2.0 feed.
« Charbono!
Pairing Imagery »