I wondered, as a drove to meet Katy Wilson at the secluded Emmaline Ann Vineyard in Sebastopol, what would motivate a young winemaker to join the fray of great pinot noir and cool-climate chardonnay production in Sonoma County.  Before I left the vineyard, ninety minutes later, I had my answer.

Katy Wilson, owner/winemaker of LaRue Wines, has had a strategy in place since she crafted a business plan for a small production 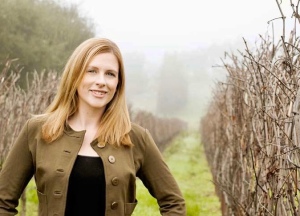 winery in Agricultural Business 101 at Cal Poly, San Luis Obispo.  Raised in farming, this could simply be a “she drove a tractor before a car” kind of story, but, a closer look reveals someone who, at a very young age, impressed her colleagues who, in turn encouraged and motivated her to make her own wines.

After stints in the Napa Valley and New Zealand, Katy settled at Flowers Vineyard and Winery on the Sonoma coast, then Kamen Estate Wines in Sonoma. Nine years ago, at age 26, Katy was offered some grapes and decided to launch LaRue Wines, vowing to limit production to 500 cases.  She named her new winery in honor of her great-grandmother, Veona LaRue Newell, who she described as inspirational and unique.

In addition to LaRue, Katy serves as a winemaker for Anaba Wine, Claypool Cellars, Reeve Wines and Smith Story Wine Cellars, all in Sonoma County.

Fine wines begin with great stock and Katy currently sources her grapes from five distinctive vineyards in the Russian River Valley and Sonoma Coast appellations. Today’s tasting began with her chardonnay release from a known Green Valley of Russian River Valley vineyard that has sourced grapes to Sonoma County icons like William Selyem, Kosta Browne and DeLoach since the early eighties.

The 2016 LaRue “Heintz Vineyard” Chardonnay ($60) expressed floral and mineral notes on the nose with vibrant citrus and stone fruit flavors through the finish.  Aged 17 months in French oak with 50% malolactic fermentation, Katy follows her instincts here,

that it’s sometimes best to leave the wine alone and let it develop peacefully.  Only 50 cases were produced.

As we tasted, Katy explained that the 2015 LaRue Sonoma Coast Pinot Noir ($60) had just began to open up during the last few months. Aged 20 months in French oak, 25% new, I found classic aromas of cherry and spice and a very balanced flavor profile and rich mouthfeel. At 240 cases, it represents about 40% of their total production.

I was impressed with all of Wilson’s releases, but thought of the 2014 LaRue “Coastlands Vineyard” Pinot Noir ($80) as special and 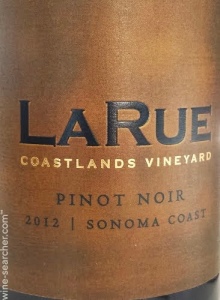 unique, from dirt to drink.  It is uniquely derived from some of the county’s oldest pinot noir vines, grown at 900-1,200 feet elevations, two miles from the Pacific Ocean. It is partly whole-cluster pressed and aged for 32 months in 50% new French oak, which is very unique.

The “Coastlands” bouquet is rustic and earthy, with notes of dark fruit and spice.  The palate is very textural and classically fruit-

forward while the finish hangs on. Only a few barrels of this wine were produced.

Grown on six-acres south of Sebastopol, the grapes sourced for the 2014 LaRue Rice-Spivak Vineyard Pinot Noir ($70) come from volcanic ash soil, rare to this region. This release expressed solid spice and mineral elements along with the classic structure and pinot fruit.

In all the releases, there was a balance that made them very approachable to drink now while understanding that they will continue to mature for years.

Since we were sitting in a handsome garden overlooking the vineyard, we ended the tasting with the 2014 LaRue “Emmaline Ann Vineyard” Pinot Noir.  The aromas were spiced and heavy with a forest-floor quality, yet the flavors were crisp and toasted.

My first impressions of LaRue wines were aptly described by the Prince of Pinot, William “Rusty” Gaffney M.D. when he said, “Her wines have a certain transcendent aura that reminds you why you fell in love with Pinot Noir in the first place.”

I plan to explore each vintage of Katy Wilson’s LaRue wines.

Lyle is a freelance writer who specializes in “lifestyle” issues like wine, food, travel, music, film and memoir. He currently writes “On The Vine,” a weekly wine column for the San Francisco Examiner. END_OF_DOCUMENT_TOKEN_TO_BE_REPLACED
This entry was posted on Monday, August 13th, 2018 at 5:07 am and posted in Wine. You can follow any responses to this entry through the RSS 2.0 feed.
« The Past, Present and Future of Rombauer
The Viader Story »