The views are both serene and spectacular, overlooking much of the Napa Valley.  The vines below the outdoor deck seem to fall down the cliffs, quickly out of view. While it is known for producing limited amounts of fine Bordeaux-style wines, the real story behind Viader Vineyards and Winery lies within Winemother Delia Viader, Phd., her determination, persistence, sense of adventure and, of course, winemaking skills.

Armed with a PhD. in philosophy and a Master’s in Business, Delia arrived on Howell Mountain in the late 1980s determined to 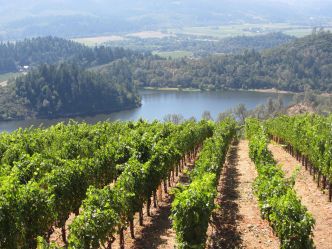 become a farmer, something puzzling to her supportive parents.  She found this alluring, remote mountaintop property that was surrounded by steep cliffs with soil packed between rocks and boulders.

Luckily, she listened to her instincts rather than dozens of experts who told her that clearing the land and planting vineyards on the steepest, rockiest slopes in the Napa Valley was impossible.  It’s easy to say that Delia has carved out a piece of heaven, but she did it one stone at a time.

Alan and I walked the extensive cave system where all the work is done after the grapes are harvested.  Everything at Viader is done in-house, from farming the estate vineyards through labeling the bottles.

The Viader Estate is 92 acres with 28 acres under vine. With the great Bordeaux blends in mind, they originally planted cabernet sauvignon, cabernet Franc and malbec, then later Rhone-style syrah. 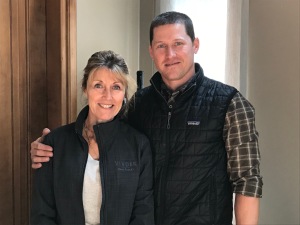 While the caves smelled of French oak, I noticed a variety of concrete options out near the crush pads. Delia was one of the first in the valley to introduce concrete aging and Viader has many concrete eggs, cones and large vats.  It is trend that is expanding everywhere and many winemakers are pleased with the enhancements that it provides.

I questioned who resolves disputes between Wine Mother and Winemaker.  Apparently, there are very few and those require little strategy to resolve.  Alan said they know what they want and he credits his fine palate to Delia. Both avoid making wines that punch you in the mouth, striving instead toward those that seduce you.

During the first eleven years of Viader, they made only one wine, a signature blend of cabernet sauvignon and cabernet franc.  Their largest production wine at a sparse 81 barrels, the 2015 Viader Signature ($175) represents the “best of the best” of the cabernet sauvignon (69%) and cabernet franc (31%), blended and aged 24 months in French oak plus another year in the bottle. The Bordeaux-style elegance is up-front, but I found potency in the aromas and rich texture throughout.

The Bordeaux’s are superb, but it’s nice to make wines in California with the freedom to explore. Delia’s unscientific poll on the 2015 Viader Black Label ($125), with cabernet sauvignon (48%), cabernet franc (21%), malbec (10%) and syrah (21%) finds that it is preferred by the younger members of the family over the traditional Bordeaux-style releases.

Some years ago, eight acres of estate syrah were planted in a new hillside vineyard.  While Alan has led this new twist and the syrah is evident on the nose and palate, the Black Label is still elegantly structured and balanced. Only 30 barrels were produced.

Malbec is featured in the small production 2016 Viader Homenaje ($150), blended equally with cabernet sauvignon.  Homenaje is a tribute to many people as well as the Viader Argentinian roots.  Although it has not been officially released, this unique Bordeaux blend is already exuding the fine character of the other releases.

These are refined wines for discerning palates. However, those wanting to indulge themselves into a memorable Napa Valley wine experience should schedule a private tasting at the Viader’s Howell Mountain estate.  Sitting out on a deck, overlooking the vineyards with views of the valley below, tasting exquisite California wines paired with fine cheeses is where you want to be.  There may be a better way to spend an afternoon, but nothing is coming to mind.

Lyle is a freelance writer who specializes in “lifestyle” issues like wine, food, travel, music, film and memoir. He currently writes “On The Vine,” a weekly wine column for the San Francisco Examiner. END_OF_DOCUMENT_TOKEN_TO_BE_REPLACED
This entry was posted on Thursday, August 30th, 2018 at 4:18 pm and posted in Wine. You can follow any responses to this entry through the RSS 2.0 feed.
« Discover LaRue Wines
Iconic Adelaida Cellars »