The storied history and elegant wines of Larkmead

All wineries have a story, but few match that of Larkmead, located five miles south of Calistoga on an estate that lies between Highway 29 and the Silverado Trail. Their story unfolds as an integral and colorful part of the history and evolution of wine in the Napa Valley.

Over a glass of their 2015 Solari, a current release from a nearby cabernet sauvignon block, I listened intently while current

proprietor’s, Cam and Kate Baker wove tales of Larkmead that spanned my lifetime. 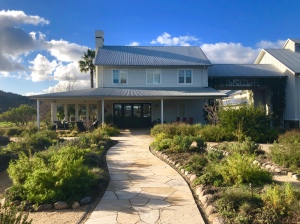 Sales Manager for Italian Swiss Colony before and after he and his wife and Napa native, Polly purchased the 110 acre Larkmead Estate in 1948. As a Napa Valley icon, Solari was once described by Robert Mondavi as a mentor.

The Solari’s, aware of Larkmead’s storied past when they purchased it, sought to sustain its rich tradition by sourcing grapes to other local producers, then reviving the Larkmead label.

Before the Solari family, the land began producing wine after it was leased, then acquired in 1895 by the Salmina family who migrated from Switzerland.

For years, Lillie Coit, the namesake of Coit Tower, lived at the estate which she named Larkmead for the abundant meadowlarks that resided in the surrounding trees. While still producing wine, she had a salon on the property and enjoyed entertaining her friends, including Robert Louis Stevenson who had close ties with the North Valley.

Kate Baker has spent her entire childhood at the Larkmead estate. She and husband Cam were very close to her parents and, while around the wine business for years, never planned to operate it, a commitment they made in 2006, in part, to honor the Solari legacy.

Cam, a graduate of Stanford University and UC Berkeley Law School had a distinguished law career interspersed with extensive community service and a stint in local politics. Kate is highly regarded as an artist and many of her works are displayed through the new 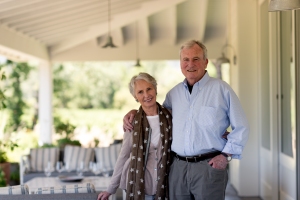 Since committing to Larkmead, the Baker’s have overseen the complete replanting of the vineyards, the construction of a state-of-the art production facility and later, the new barrel room and lounge.

The Napa River, that dissects the property, along with elevation drops have resulted in the deposit of a unique diversity of clay, gravelly and sandy soils that are matched with a variety of clones and rootstock of cabernet sauvignon, merlot, cabernet franc, petit verdot, malbec, sauvignon blanc and an acre of left over tocai friulano.

Dan Petroski became the Larkmead Winemaker in 2012, working his way up from Cellar Master and Assistant Winemaker, beginning in 2006.  To achieve his desire for a savory lushness in his wines, Petroski is known for picking his grapes earlier, sometimes three to four weeks before anyone else.

Veteran consulting winemaker, Scott McLeod filled in for Petroski and led us through a tasting of current Larkmead releases beginning 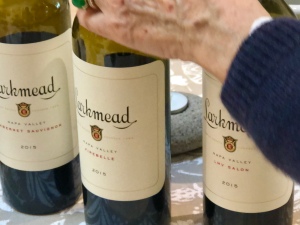 The Wines of Larkmead

with a limited sauvignon blanc, a crisp wine, aged in oak foudres from Sancerre.

Larkmead’s wines are defined as a Vineyard Series that showcases the estate varietals and the Larkmead Series that includes three different block-specific cabernet sauvignon releases, each from a different soil type.

The 2015 Cabernet Sauvignon is Larkmead’s most popular and highly produced wine at 2,000 cases.  Young by their standards, it was nicely balanced, fruit forward and soft on the palate.  Other wines in from the Vineyard Series include the 2015 LMV Salon, that features cabernet franc and the merlot-based 2015 Firebelle, both named after Lillie Coit.

The Larkmead Series are all among the best of Napa Valley cabernet sauvignon.  The elegant 2015 Lark, the 2015 Dr. Olmo, named for known plant breeder and the 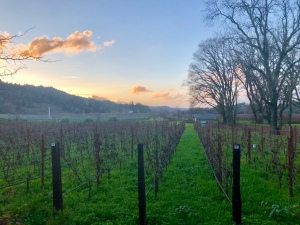 aforementioned 2015 Solari all originate from land described as one of the ten best vineyard sites in the Napa Valley.

Whether it is savoring the history surrounding the estate, relishing in Cam and Kate’s commitment to the future or simply enjoying elegant wines, Larkmead is a special experience that’s worth a day trip.

Lyle is a freelance writer who specializes in “lifestyle” issues like wine, food, travel, music, film and memoir. He currently writes “On The Vine,” a weekly wine column for the San Francisco Examiner. END_OF_DOCUMENT_TOKEN_TO_BE_REPLACED
This entry was posted on Thursday, January 31st, 2019 at 5:19 am and posted in Wine. You can follow any responses to this entry through the RSS 2.0 feed.
« Tasting Fine Napa Valley Merlot
Winemakers adjust to the impacts of climate change »