Winemakers adjust to the impacts of climate change

With everything that surrounds the mystique of wine, it is, essentially, an agricultural commodity, produced by farmers.  Like all farmers, wine grape growers are and must continue to adapt to the challenges of climate change.

The French word, “Terroir,” is used to describe wine grapes matched with the perfect soil type, rainfall, temperatures, sun and wind exposure, elevation, etc.  Scientific data has shown that the terroir is changing. 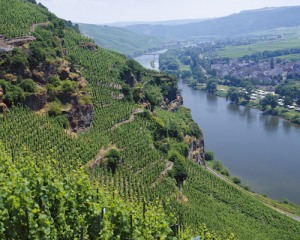 Hillside vineyard above the Mosel River

percent.  However, climate change may demand thinking beyond the grapes that have flourished in their regions for decades and even centuries.

As a co-author of a study in Nature on the impacts of climate change, assistant professor of organismic and evolutionary biology Elizabeth Wolkovich suggests that diversity is the answer for wine growers who should be exploring lesser known varietals.  She explains that while the old regions of Europe grow over one thousand different grapes, there are only twelve varietals that comprise over eighty percent of the market in New World countries

The Europeans, for the most part, produce blends that are not dependent upon a single varietal, whereas, in the United States, we have become fixated on single varietals like cabernet sauvignon, syrah or sauvignon blanc.

Change in most parts of Europe will be difficult because of strict ordinances that carefully regulate what can and can’t be planted.  In California, we are regulated only by the strong influences of terroir and comfort.  Who can imagine the Napa Valley weaning itself from cabernet sauvignon and selling the vines to growers in a warmer Russian River Valley?

Don’t look for that change soon. The 2017 California harvest of cabernet sauvignon, the world’s most planted grape, was up six percent from 2016 at nearly 600,000 tons.  In contrast, most other varietals were down including popular chardonnay which dropped nine percent, the result of abnormal heat spikes.

California now grows sixty different wine grape varietals and Washington State has long had success with diverse plantings.  In contrast, Oregon is mostly pinot noir and may not be well-positioned to adapt to climate change.

Although it may be short-lived, there is one country that is reaping the rewards of climate change. Over the past three decades, while

Germany’s agricultural and tourist industries have been negatively affected by steadily rising temperatures, Germany’s wine industry,  at least for the time being, is benefitting from the spikes in heat, primarily because their prized riesling grapes are fully ripening.

A northern European country that has long been associated with beer, Germany has historically created fine riesling and gewürztraminer in the southerly Mosel region along the French (Alsace) and Luxembourg borders. Summer temperatures in Mosel had been fairly cool, averaging 64 degrees which, at times, did not allow the grapes to fully ripen, ultimately holding back the full expression of fruit and roundness to the wine.

Today, viticulture in Germany is less about finding ways to allow the grapes to fully mature and more about the fear of over-ripening. With increased temperatures, the riesling grapes are consistently ripening earlier increasing the yield and the quality of the wines, culminating with the 2018 vintage, that many say will be the best in a lifetime.  While acknowledging the harmful impacts of climate change to our planet, German winemakers admit that today, it is a boom for their product.

Conducive terroir for wine grapes has expanded to the North and opportunities to plant red varietals are growing.  There are reports of cabernet sauvignon, syrah and pinot noir plantings, previously unknown to Germany’s wine history, that are producing high-end results in the bottle.

Thirty years ago, all red grapes represented only ten percent of German vineyards, half that of riesling. Since then, higher average temperatures and a new approach to making red wines has catapulted them into the fore front.  Winemakers have focused on lower yields, malolactic fermentation to reduce acidity and oak aging to achieve their success.

Increased plantings of pinot noir, called spätburgunder, embody the growth of new German red wines that can be found online or in fine wine outlets throughout the Bay Area.

Meanwhile, we should all take advantage of extraordinary German kabinett (austere), spatlese (late-harvest) or auslese (dessert) style riesling wines, warmed by the new heat, and abundantly available at higher, but still reasonable prices.

Lyle is a freelance writer who specializes in “lifestyle” issues like wine, food, travel, music, film and memoir. He currently writes “On The Vine,” a weekly wine column for the San Francisco Examiner. END_OF_DOCUMENT_TOKEN_TO_BE_REPLACED
This entry was posted on Tuesday, February 12th, 2019 at 4:06 am and posted in Wine. You can follow any responses to this entry through the RSS 2.0 feed.
« The storied history and elegant wines of Larkmead
Clos du Val Winery continues to make history »